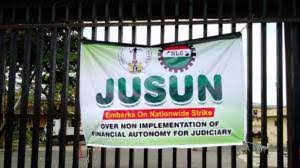 The Judiciary Staff Union of Nigeria (JUSUN), has apologised to the Minister of Labour and Employment, Sen. Chris Ngige, over its unfriendly labour approach at a conciliation meeting.

The letter was made available to journalists by Mr Charles Akpan, Deputy Director, Press and Public Relations in the ministry, on Tuesday in Abuja.

JUSUN had on April 20, staged a walkout at the meeting called by the minister, including the Parliamentary Staff Association of Nigeria (PASAN), to resolve the ongoing strike by the unions following the failure of the minister and officials of the ministry to be present at the meeting slated for 3: 00 p.m. at 4: 35pm when they staged the walkout.

Adetola urged the minister to continue with the meeting, geared towards an amicable resolution of the strike.

â€œSir, information has reached our union that the Hon. Minister of Labour and Employment, has expressed dissatisfaction with the way JUSUN members left your conference room on Tuesday, April 20.

â€œJUSUN wishes to put it on record that many of our members at the conciliation meeting are Muslims and were fasting on the day in question.

â€œHaving stayed for about two hours without communication from any quarter of the ministry, JUSUN members, agitating and complaining that they needed to go and break their fast, had to leave.

â€œAll other things put aside, JUSUN commends and appreciates the role of the Ministry of Labour in ensuring peaceful relations at work place; in the case of JUSUN, by trying to ensure conducive environment, and justice for all Nigerians.

`Therefore, we sincerely urge the minister to continue with the conciliation meetings, which you have commenced.

â€œWe are all concerned about the good of Nigeria and all annoyance should not be carried too far and be allowed to derail us,â€ he said.

According to Adetola, JUSUN is tendering its unreserved apology to Ngige in whatever way it has hurt the minister.

The minister according to reports has already accepted the apology, and said a new date for continuation of the conciliation will be communicated shortly to all relevant stakeholders.