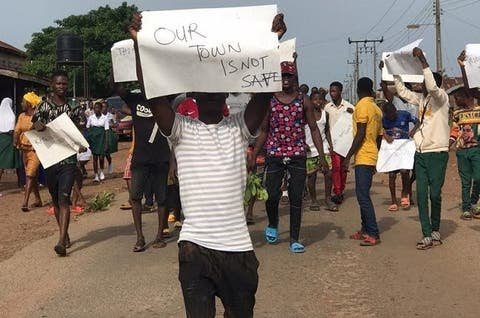 Angry youths of the Otan-ile community in Obokun Local Government Area of Osun State on Thursday went on a rampage to protest the indiscriminate arrest of community members by the State Police Command.

The protesters who stated that innocent indigenes of the town were arrested by the police when they opposed the invasion of Fulani herdsmen in their farmlands, frowned at the act they described as callous and uncalled for.

Armed with banners, flags, and placards with different inscriptions that read: â€ We reject Bororo in our community,â€ â€œWe donâ€™t want them again in our locality,â€ â€ They are destroyers and inhuman in action.â€

The protesters said they embarked on the rampage to lodge their grievances on the spate of destruction on their farmlands by the Fulanis.

Also, women in the community also prepared traditional fetish objects and placed them in different junctures of the go n to register their grievances against the one-sided attitude of the police.

Speaking with our Correspondent, one of the leaders of the protesting youths, Wasiu Sanusi said, the youths in the community are fed up with the excesses of the Fulani herdsmen and the connivance with the police. He told our Correspondent that the bullets removed from the cows were not local bullets but those of riffles.

â€œSo, we are baffled at the way the herdsmen are threatening us on our lands. They continue to use police to arrest our people, detain them and make them pay for bail for offenses they know nothing about. Where would our people get riffles What they use here a Local or Dane guns and the bullets removed from cows are not local bullets.

â€œWe have resolved that these people should vacate our community since cohabitation is not working. We canâ€™t be threatened on our lands and continue as if nothing is happening.â€ Sanusi said unity leaders on Thursday converged at the town hall for the meeting on way forward.

All calls put across to the state police command spokesperson, Mrs Yemisi Opalola. were not going through.