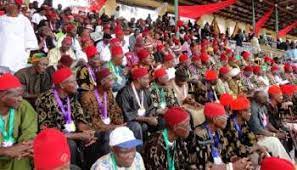 Ahead of the May 30 Biafra Day celebration, the Ohanaeze Ndigbo Worldwide has called on Biafra agitators to avoid the temptation of engaging in any form of clash with security operatives. The Editor reports.

The apex Igbo socio-cultural organization, in a statement on Wednesday, urged the pro-Biafra groups to avoid â€œany form of parades, display of Biafra flags/rallies and solidarity protests on May 30th /31st 2021 Biafra Day.â€

This was contained in a statement signed by the Secretary-General of the organization, Mazi Okechukwu Isiguzoro.

While calling for a six-month ceasefire deal on the side of the agitators and the government, he demanded unconditional release of all detainees.

â€œIPOB of Mazi Nnamdi Kanu, Biafra National Council of Asari Dokubo, MASSOB of Uchenna Madu, BIM of Ralph Uwazurike and Biafra-Zionists of Ben Onwuka and others are all our children, we acquit of all arms struggles and urge them to desist from activities capable of militarization of Southeast and Niger Delta.

â€œItâ€™s our commitment to enforce on all the agitators self discipline, mutual understanding and strict adherence to the tenets of non violent agitations and universally accepted norms of self determination,â€ he said.

Isiguzoro added that â€œNdigbo will continue to identify with them until there is total restructuring of the country and end to the marginalization of South-East Nigeria by the Federal Government.â€

â€œOhanaeze Ndigbo asks all Biafra agitators to go along with the request of South-east Governors led by Governor David Umah for a grace of 6 months to negotiate with the Federal Government and end marginalization of Southeast.

â€˜We are also imploring the Southeast Governors to use the window of June 12 Democracy Day to release all Biafra agitators in all the Correction Service Centres through â€œSTATE PARDONâ€, especially in Imo state where the state government announced the random arrests of innocent people, mainly Youths.â€

â€œWe call on President Muhammadu Buhari to interact with Southeast Governors on the best approach to handle the insecurity challenges in South Eastern Nigeria as guns, helicopters, gunships and ammunition will not end secessionist campaigns. Carrot and stick approach remain the best way to make peace with the agitators.

â€œThe Federal Government should also rescind the shoot at sight order, just as we urge the South east Governors to plead with the federal government for the withdrawal of military from the southeast.

â€œAll activities of arms struggle, attacks on police formations and INEC offices in southeastern Nigeria must end, most police officers killed in these dreadful assaults are igbos, and it must end quickly.

â€œPolice and military special operations in the Southeast must respect human rights and put human face to deescalate the chaos and violence in the South East,â€ Ohanaeze further stated.