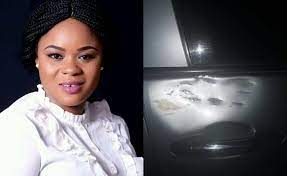 The car of a deputy National Youth Organizer of the opposition National Democratic Congress Ruth Dela Seddoh was attacked by suspected robbers on her way from the Western North.

The second Deputy National Youth Organizer said the incident happened around the Nkawkaw stretch when an assailant threw a heavy stone at her vehicle ostensibly targetting the glass but smashed the side door.

The stoneâ€™s impacted caused some dents and scratches on the ash private car in which the NDC executive was traveling.

â€œHello guys, insecurity in this country is really at its scary height. On my way back from Western North, a stone was thrown into my car on the Nkawkaw stretch by unknown attackers. I really give thanks to God, it didnâ€™t hit the window. It was so intense that it would have broken the window and hit me. Grateful I escaped this. Letâ€™s all take our security seriously and protect ourselves, we are all not safe.â€

It appears this trick is a common attack trick these days to make drivers stop on the highway.

According to police, the suspect smashed the side glass of a vehicle in an attempt to rob its occupant.