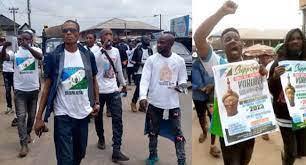 There was tension in Abeokuta, Ogun State, on Saturday, as security operatives arrested five agitators of the Yoruba nation who defied the police ban on a mass rally in the state capital.

Editor Nigeria Gathered that a young man called Zannu Williams, who wore a traditional regalia, was among those who were arrested.

The Police Command had barred the agitators from the mass rally, saying intelligence report showed that the organizers of the rally â€œare being sponsored by certain individuals outside the State and the country to destabilize Ogun State.â€

The Spokesman of the Command, Abimbola Oyeyemi, in a statement said the proponents of the Yoruba nation had held series of rallies in the different parts of the State, but the command would not perpetually stand by and watch public conducts of some citizens â€œhold others to the ransom and threaten the corporate existence of the country.â€

He said: â€œThe Command therefore, wishes to appeal to the leaders of this group to shelve the idea of staging another public rally in any part of the State for now, as such is capable of undermining the relative peace being enjoyed in the entire State.

â€œConsequently, the rally slated for Abeokuta on 1st May, 2021, is viewed by the Command as one too many in the State, and therefore not approved.

â€œParents and guardians are hereby advised to warn their children and wards not to be involved in any of such gathering that may expose them to violence and consequently bring them on a collision course with the security agencies.â€

But a pro â€“ Yoruba nation group, Ilana Omo Oodua, declared that the agitators would not back off on the rally.

As early as 7am on Saturday, our correspondent observed that security operatives took over the streets of Abeokuta in order to stop the rally.

Police helicopter was also hovered over some areas in the state capital.

However, a procession of the Yoruba nation agitators, in defiance, passed the Ake palace street, despite the presence of heavy security men.

With solitary songs blaring from the speakers attached to the moving vehicles, the procession comprising young men and women, headed towards Adatan area of the metropolis.

â€œWe have arrested about five persons including a woman,â€ a police source told Daily Trust.