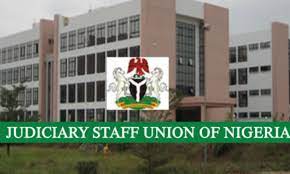 The strike by the Judiciary Staff Union of Nigeria took a worsening dimension on Friday with the organisation calling on members nationwide to continue with the industrial action.

JUSUN said the directive followed the collapse of negotiations on the way forward out of the trade dispute.

The directive, which was contained in a circular signed by the Deputy National Secretary of JUSUN, P. Nnamani, issued on April 16 and addressed to its National Executive Council and all members nationwide, was obtained by journalists on Friday.

The union expressed the appreciation of its National Chairman, Marwan Adamu, to members for their spirit of solidarity and comradeship exhibited in the industrial action.

The circular read in part, â€œYou are by this notice informed that the industrial action continues as the Federal Government and the governors are yet to find the grounds of meeting with our demands. We are aware of the threats and pressure that may come from the â€˜governorsâ€™ but please be resolute.

â€œFurther, be informed that following an emergency meeting of the NWC on April 15, 2021, it is agreed that the union would organise a â€˜peaceful protestâ€™ in the Federal Capital, which will be replicated in the 36 states capital in furtherance of our agitations, from April 19, 2021.â€

Several meetings held between the leadership of JUSUN with the Chief Justice of Nigeria, Justice Tanko Muhammad; the Nigerian Governors Forum; Nigerian Bar Association; the Minister of Labour and Employment, Chris Ngige; and some members of the House of Representatives failed to end the strike.