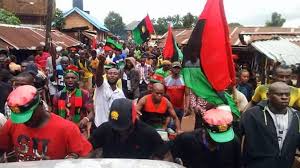 The proscribed Indigenous People of Biafra has denied working with native doctors.

The groupâ€™s Media and Publicity Secretary, Emma Powerful, said this in a statement on Monday in Awka, the Anambra State capital.

The secessionists said the police lied by saying they killed a native doctor that was preparing charm for them.

The statement reads in part, â€œLet us reiterate once again that neither Eastern Security Network nor IPOB kills people since its formation by our indomitable leader Mazi Nnamdi Kanu. We also do not have any native doctor as we do not believe in fetish acts. Our trust has always been in the Almighty God.

â€œIt is ridiculous for the Nigeria Government to associate IPOB or ESN with their moon tale narrative of a native doctor and charms. Assuming but not conceding to the laughable tale by the Nigeria police, does it make any sense that we will turn around to kill the same native doctor allegedly preparing charms for us?

â€œThe security agents should stop blackmailing themselves thinking they are doing so against IPOB and ESN. They should stop killing and burning the houses of people and blame their wickedness on IPOB and ESN. We do not kill the same people we are sacrificing so much to liberate. Spilling of blood is not part of our mandate.â€