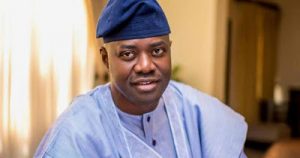 Governor Seyi Makinde of Oyo State on Monday inaugurated the Board of the Oyo State Security Network Agency, codenamed Amotekun.

The Editor recalls that Amotekun was established by Governors of South-West Nigeria in view of the security challenges facing the region.

According to the Governors, the new security outfit was established in order to address the rising cases of kidnapping, killings and attack of innocent citizens in the region.

Oyo State Governor, Seyi Makinde while inaugurating the board on Monday, said that the people of the state will see more visible actions being taken by the government to secure the State.

The Editor gathered that the board which has Brig-General Ajibola Kunle Togun (rtd) as Chairman also has Mrs. Akinbode Iyabode Enitan as itâ€™s Secretary.

Other members of the 12-man board are; Amotekun Commandant, Col. Bisiriyu Olayinka Olayanju (rtd), the Commissioner of Police; State Commandant of the Nigeria Security and Civil Defence Corps; representative of the Armed Forces of Nigeria in the state; and the Executive Secretary, Oyo State Security Trust Fund and Special Adviser on Security, COMPOL Fatai Owoseni (rtd).

Makinde, while speaking maintained that his government will continue to prioritize security of lives and property of the people.

He added that contrary to insinuations, a lot more people and businesses have been coming to the state as a result of the policies of the administration.

He, however, called on residents not to panic.

He advised them to join hands to secure the state.

Makinde said, â€œWe know that because of the policies of this administration, a lot of people are coming into Oyo State, and when you have more and more people coming in, it will come with its own set of challenges and with opportunities as well.

â€œIn the days ahead, we will also let the people of Oyo State know the things we are doing as far as security is concerned.

â€œAnd when they see security operatives all around, they must give them total support.

â€œYes, I can go to Igangan and take responsibility for some of these activities but security is our collective responsibility. It is not just for the government or governor alone.

â€œSo, everybody needs to come on board and play their own part.â€