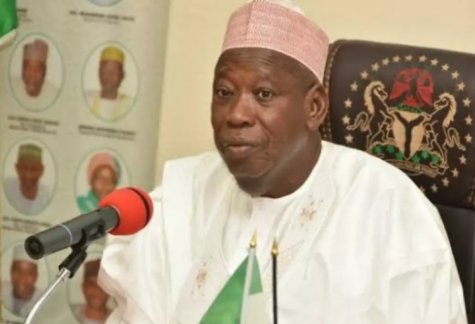 The governor of Kano State, northern Nigeria,Â Abdullahi Ganduje, has proffered solution to Nigeriaâ€™s security challenges, recommending the use of Information Communications Technology (ICT) as the best approach to tackling the growing menace.
Theeditorng.com reports Governor Ganduje spoke during his paper presentation on â€œPromoting National Security and Economic Development: The Kano State Experience,â€ hosted by the Executive Intelligence Management Course Dialogue (EIMC) of the National Institute for Security Studies (NISS), in Bwari, Abuja.

The Kano governor also suggested other ways, such as community policing and the setting up of a joint security task force that includes the police, army, and other paramilitary groups.
Ganduje argued that â€œThe modern concept of National Security is predicated on the primary function of government to defend the citizens, the institutions and the economic development of the state.â€
Speaking further, the governor explained that the activities of government are the driving force in achieving peace and stability in a nation, adding that â€œnational security is synonymous with economic
development of the state.â€

Speaking further, the governor explained that the activities of government are the driving force in achieving peace and stability in a nation, adding that â€œnational security is synonymous with economic development; No society will develop in an atmosphere of insecurity and terrorism,â€ he highlighted.
His words: â€œSecurity is presently a major challenge in Nigeria. So, I am here to bring to your attention the Kano state experience in securing our environment when more people are getting into crimes in ruthless, desperate, and sophisticated ways.

â€œIn an effort to tame kidnapping and other crimes, the Kano state government has adopted the ICT approach; we have the best tracking gadgets in the country.
â€œCommunity policing is one of the major steps we give priority for the security of the state. We established the Command and Control Centre to have all access to criminals with the sole aim of taming them for the security and development of our state and the country,â€Â the governor said.
The governor added that another way of tackling insecurity, Ganduje disclosed, is the â€œestablishment of a joint security task force that includes Police, Department of State Security, Army, Air Force, National Security, and Civil Defense Corps.â€

While acknowledging that unemployment constitutes significant percentage in increasing the rate of crimes, Governor Ganduje disclosed that â€œLooking at that, made us think that we (Kano State) must come up with a modern skills acquisition centre. Which we did and named Aliko Dangote Skills Acquisition Centre, with over 20 different kinds of trades.â€
The governor stated that all the feats in the security sector became possible because of the political will from his part, â€œwith the development of institutions with committed people and modern equipment.â€

Governor Ganduje listed rape as part of the major crimes that must be tackled. â€œOn rape, we have life imprisonment for rapists. We are also considering castration for rapists. We just have to deal with this dehumanising issue head-on.â€

I Was Once A Plumber â€“ Sanwo-Olu