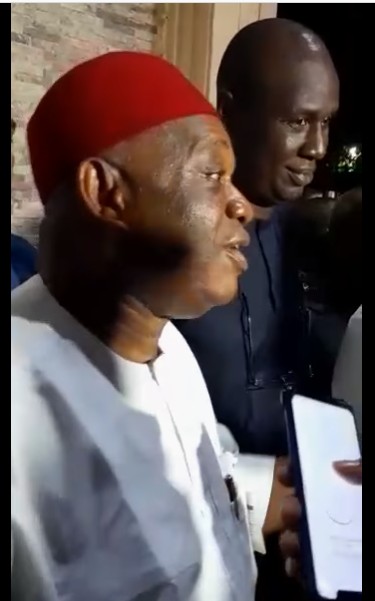 Former Governor of Abia State and Chief Whip of the Senate, Senator Orji Uzor Kalu has revealed that Governor Okezie Ikpeazu would soon dump the Peoples Democratic Party for the All Progressive Congress, APC.

Theeditorng.com reports that Senator Kalu, a chieftain of APC, disclosed this in Umuahia while fielding questions from journalists after a condolence visit to the member representing Umuahia East state constituency, Hon. Chukwudi Apugo over the demise of his mother, Madam Dorothy Apugo.

The former governor claimed that Ikpeazu promised to join APC during his first electoral case at the Supreme Court.
Kalu who expressed delight over the recent defection of Gov. David Umahi of Ebonyi State from PDP to APC said they were awaiting the arrival of Okezie in APC.
His words: â€We have been waiting for Umahi because he made us the promise long ago like Abia governor Ikpeazu.

â€We are waiting for Ikpeazu unless he changes his mind. One of my friends, a top security czar in Nigeria told me that when Ikpeazu was going for his first Supreme Court judgement, he promised that he would go to APC.
â€I was called to agree to welcome him, and I agreed. APC is a party for allâ€.

Meanwhile efforts to reach Ikpeazu did not succed as his Chief Press Secretary, Onyebuchi Ememanka did not pick calls put across to him by our Correspondent.

Commissioner for Information, Chief John Okiyi Kalu, had however, in a recent media interview, dismissed rumours that Ikpeazu was plotting to defect to APC as false, insisting that the governor has no such plans.

The former Abia Governor who claimed he was the first person to doll out the initial N500 million to sponsor PDP at ex President Olusegun Obasanjoâ€™s house, said APC meant well for Ndigbo contrary to perceptions in some quarters.
Asked how he felt about the recent call to assume the role of political leader of Abia state, Senator Kalu said he appreciated the invitation but added that he would not yet do so when there was a sitting governor.

â€I canâ€™t assume the position of a leader when there is a sitting governorâ€, Kalu said.
He boasted that APC would sweep Abia State come 2023.

Earlier in his interaction with Apugo, he said he came to condole with the lawmaker over the death of his mother as he could not attend the burial following crucial engagements at the senate.
He urged him not to over sorrow over the loss of his mother who he said lived a good life.
Orji prayed God to grant the Apugo dynasty and all those affected by the demise of the late Madam Dorothy the fortitude to bear the loss.
Responding, Hon Apugo thanked the former governor for identifying with them during their moment of grief despite belonging to a different political party.

The lawmaker said the former governor had shown true leadership by jettisoning partisan politics to identify with political opponents.
On the entourage of the former governor were some APC lawmakers in the Abia State House of Assembly; Kaluâ€™s brother, Mascot Uzor Kalu; and some APC top shots.
Former Speaker of Abia House of Assembly, Chinwendu Kalu was also on ground to receive him.