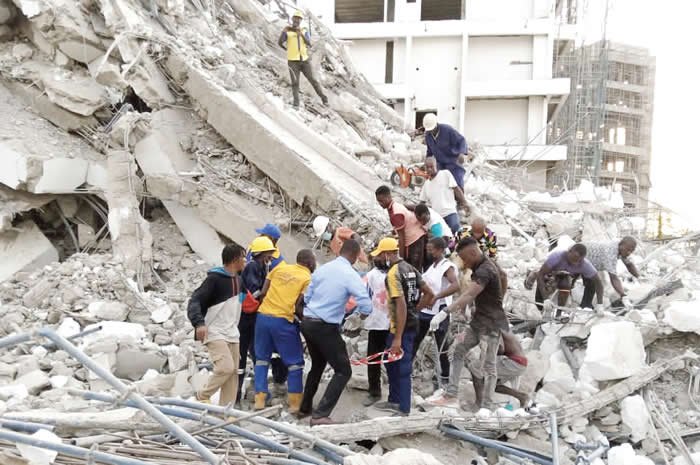 The corpses of the Managing Director, Fourscore Heights Limited, Mr Femi Osibona, and his friend, a United States of America-based Nigerian businessman, Wale Bob-Oseni, have been recovered from the 21-storey building that collapsed on Gerrard Road in the Ikoyi area of Lagos State.

The Editor Nigeria learnt that their bodies were found on Thursday by responders during the recovery operation at the scene of the incident.

Bob-Oseni, a real-estate dealer, was on his way back to the US on Monday when he got a call from Osibona to check out the project.

Both friends were subsequently trapped when the building collapsed.

Our correspondents had reported that the 21-storey building crumbled on Monday around 2pm when Osibona, who owned the project, his clients and workers were on the site.

One of our reporters, who was at the scene on Thursday, reported that no fewer than 40 corpses had so far been recovered from the site.

However, the Lagos State Governor, Babajide Sanwo-Olu, around 1pm said 32 bodies were recovered.

Families lament delay in identifying corpses
Some relatives of the victims lamented the postponement of the identification of corpses recovered by emergency workers.

They recalled that Sanwo-Olu said autopsies were being conducted on the corpses but families would be able to identify their loved ones from Thursday.

The bereaved families said when they visited the Mainland Hospital mortuary, Yaba, on Thursday, they were denied access to the bodies.

The father of an 18-year-old boy, Edward Godwin, while in tears, said he was not allowed to identify his son’s body despite the governor’s assurance.

He said, “I honestly needed to see my son yesterday (Wednesday). I’ve been to the general hospital to check those injured, but my son was not there. I thought I would be able to see him today, but I’ve not been able to see my son.”

A woman, who did not identify herself, said she had been to the state morgue as well but was not allowed to identify her sister’s son.

“I want to know if the boy is still alive or dead. I have not told my sister about what happened because she’s not staying in Lagos and I want to know if he’s dead or not before telling her. The government should just allow us to see if our people are there or not.”

Another woman, who identified herself as Florence, said she spoke with her brother on Sunday before she got a call that he was among those trapped.

She said, “My younger brother is here; I spoke with him last on Sunday but someone called me that something happened and I came here yesterday.

“Someone told me he was among those rushed to the hospital and I went to the general hospital and showed someone his picture and he confirmed that he was brought in unconscious. But since yesterday, I’ve not seen him or sure of the hospital he was taken to.”

It was observed that a black Toyota Highlander reportedly owned by an aluminium fabricator trapped in the rubble was driven away from the site on Thursday.

The wife of the victim, who sat under a tree, looked vague and declined comment when one of our correspondents approached her.

Conflicting casualty figures
A senior government officer, who did not want to be identified, said that 35 males and three females were brought out dead from the rubble as of 11.50am on Thursday.

One of our correspondents, who was at the scene, noted that more bodies were brought out after that time.

However, the state governor, Sanwo-Olu, while addressing journalists on Thursday around 1pm, said the state Ministry of Health was in charge of taking corpses to the morgue.

He said, “As we stand here and we speak, we have recovered a total of 32 dead bodies and they have been transported to the morgue and the reason why the corpses were moved to the IDH is because it’s one of the foremost preserved morgues we have in Lagos.

“Let’s understand what the chain of command is. This is a Lagos State site and so the Lagos State’s chain of command and control is from the state Ministry of Health; they are the ones that have taken corpses to the morgue so they are accountable and the people that are moving corpses here are staff of the Lagos State Ministry of Health; the staff that are leading rescue here are staff of LASEMA.

Families, sympathisers at the scene
“A dead body is not what you hide; it’s what you take to the morgue and it’s only when it’s accountable from here to the morgue that we have a proper register of it.”

Speaking on why families were not able to identify their corpses, Sanwo-Olu said autopsies had not been concluded.

“The coroner inquest takes their turn and the certification by the pathologists are currently going on. We’re pushing them to ensure they can work very quickly to make if not all the bodies but some of the bodies ready by tomorrow (Friday).

“That is the deadline we have pushed them to so families can come and look and identify the bodies and at the appropriate time take their body away,” he added.

The governor, however, said he would give an exception to the man who came from Abuja to check the photographs of the bodies recovered and see if his son was there.

Sanwo-Olu noted that the independent panel that would investigate the collapse had been officially inaugurated and given a seal of office.

He said, “They have all the powers in case they want to summon, ask and engage anybody whatsoever in the course of their investigation to be able to give a thorough objective and transparent advice and recommendations coming out from the investigation panel and they have 30 days turnaround to do their work because of the importance and urgency.”

The governor, in a statement by the state Commissioner for Information and Strategy, Mr Gbenga Omotoso, commiserated with all those who lost their loved ones in the tragic incident.

“All flags are to be flown at half-mast in public and private buildings and official engagements cancelled during the mourning period,” he added.

Sanwo-Olu noted that since the help desk was opened on Wednesday, only 19 names of missing persons had been registered with the state government.

He said the number of persons trapped in the collapsed building remained unclear.

The governor said, “Yesterday (Wednesday), we opened a register for people that have missing persons or loved ones whom they believed must have been at the site before the collapse. As I speak here, it is only 19 names of missing persons that have been registered. Some of them have pictures, others do not. This list would help us to get information on manifest of those at the site.”

Dowen College Vs #SylvesterOromoni : I Will Not Bury My Son Until… – Father