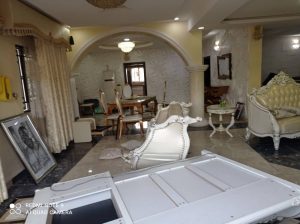 They described the invasion as â€œcapable of foisting unwanted civilian guerilla actions against the Nigerian state.â€

They made this known through their group, Nigeria Consultative Front (NCFront) as they berated President Muhammadu Buhari for running the country recklessly

According to them, the move is capable of bringing â€œtotal collapse and civil war.â€

The group in a statement by its National Secretary, Olawale Okunniyi, vows to take this abuse of power to the International Court of Justice at the appropriate time.

The statement reads, â€œLeaders of Conscience under the auspices of Nigeria Consultative Front, (NCFront) jointly led by former Speaker of House of Representatives, Rt Hon Ghali Naâ€™aba and Former Presidential Candidate, Prof Pat Utomi wish to condemn in the strongest terms the midnight invasion, attack, murder, maiming and abduction carried out today by the Nigerian military and Operatives of the Department of Secret Services, DSS, against defenceless and innocent citizens at the Ibadan home of a frontline Yoruba self-determination activist, Chief Sunday Adeyemo, aka Igboho over his rally for self-determination for the Yorubas in Nigeria.

â€œWe wish to state unequivocally that the current military attack against Sunday Adeyemo and other self-determination activists, at this delicate period of Nigeria, is wrong-headed, reckless and uncalled for as experiences around the world have shown itâ€™s capable of foisting unwanted civilian guerilla actions against the Nigerian State given the unprovoked ruthless use of naked force and bestiality to drive unarmed citizens underground.

â€œThe NCFront again perceives the midnight gun attack of Sunday Igbohoâ€™s residence and dastardly murder of his family members as nothing but reckless abuse of power and violation of Sunday Igbohoâ€™s privacy and fundamental human rights, which should be condemned by all well-meaning Nigerians and citizens of conscience. So, this abuse of state power shall be taken up by NCFrontâ€™s National Secretariat before the International Court of Justice, ICJ, in due course.

â€œSimilarly, we wish to warn General Muhammadu Buhari-led regime to immediately desist from running Nigeria as a police state having allowed the country to slip into a Criminal Enterprise at the brink of total collapse and civil war. Therefore, we demand the fair and careful handling of the matter and trial of Mazi Nnamdi Kanu, the IPOB Leader, especially the respect of his fundamental human rights while in the custody of the Nigerian Government.â€

The group went advise President Buhari to institute a platform to embrace dialogues that would restore peace and unity among the Nigerian people. It also revealed that a referendum should be called for to decide whether Nigerians will co-exist as one or go separate ways.

â€œFinally, we wish to task the Nigerian Federal Government to immediately put machinery in place to restore national understanding, cohesion, harmony, stability, peace and prosperity by urgently convening a national justice and reconciliation meeting of key stakeholders of the diverse strata and facets of the country.

â€œThe Buhari Government should however note that nothing could restore peace and stability to the country as much as the official embrace of a peopleâ€™s constituentsâ€™ assembly and referendum to decide how Nigerians want to democratically coexist and run their political affairs constitutionally as the ongoing constitution amendments by the National Assembly can barely save the country from pervasive insecurity and anarchy rocking its foundation,â€ the statement said.