One of the repentant bandits who surrendered their AK47 rifles and ammunition at the chamber of Zamfara Government House yesterday, Amadu Katare, has revealed that he was forced to become a bandit due to the extra-judicial killing of his parents, wives and children by local vigilantes. 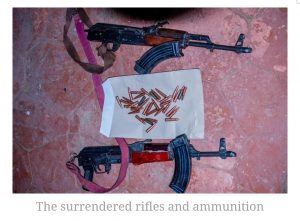 The repentant bandit noted that there were so many people who turned to notorious bandits due to extra- judicial killings of their relatives.

“We are not thieves. We were law-abiding citizens; we are just fighting the injustice meted out to us by the vigilante group.”

He further stated that the peace initiative of the state Governor, Bello Matawalle has encouraged many to renounce banditry.

“Also, there are other colleagues in Zamfara, who vowed to continue banditry but relocated to the Niger Republic because they learnt that the government in Zamfara is committed towards the peace dialogue and they cannot operate in the state.”

“Most of us earlier believed that the peace dialogue initiative was the usual government deceit, which was the reason why many ignored it. However, with me coming out to embrace the peace dialogue, I will convince many other colleagues who are sceptical to surrender.” 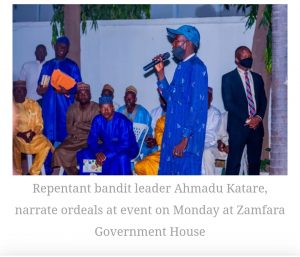 According to him, the outlawed Yansakai members escalated the rate of banditry activities in the state, pointing out that the Yansakai members are still attacking the Fulani people even without any reason.

“There will never be any peace in any society if injustice continues to reign supreme,” he said.
Katare said that every body is believing that Fulani people are the only people responsible for banditry in the state, saying that the Yansakai members are the major problem not the Fulani’s are popularly believed.

He however assured that his group would engage other Fulani bandits to ensure that they embrace the ongoing peace accord and reconciliation process.

Kagara kidnap: No help from federal government to rescue schoolboys –...

Lagos Hits With Massive Infection, 1 in 5 People May Have...