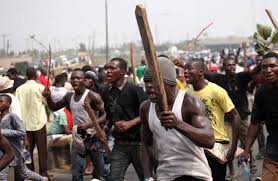 A motorist plying Owerri/Orlu road in Imo State, in his Siena vehicle ash colour whose identity is yet to be identified, has been beheaded by unknown gunmen with the manâ€™s legs and hands chopped off at Okwudor junction in Njaba Local Government Area.

The Editor Nigeria gathered that the incident happened on Saturday.

According to some community sources, hoodlums have been terrorising them in the area for the past week.

They said: â€œWe woke up early morning of Saturday and discovered along the road at Okwudor junction in Njaba Local Government that a lifeless body and his head, hands and legs have been cut off. We think they are hardened criminals looking for a way to prepare charms for themselves.

â€œOn Friday night we had several gunshots from different areas around the Okwudor junction. We were afraid that armed robbers had already come to attack us in our village but after about 30 minutes everywhere was calmed and we were surprised to come out and see this dead body. We are afraid these hoodlums want to take over Njaba.â€

In another development in the same Njaba, over ten vehicles have been set ablaze and two suspected Police Officers were killed when unknown gunmen attacked Njaba Divisional Police station at about 02:40 pm on Saturday.

Also, the buildings belonging to the Njaba Police station were completely razed down.

Some people who spoke to Vanguard said: â€œThese men who attacked the Njaba Police station were in their convoy and they wore black attire. When they came, they started shooting in the air and people ran away.

Reacting, the State Police Public Relations Officer, PPRO, Mike Abatam, said not only that two of the suspected hoodlums had been killed but that the Operation Restore Peace team of the police had cordoned off the Njaba area.

â€œMeanwhile, cordon and pursuant exercise is ongoing in the area and members of the public residing in the area should not panic as the ongoing Police clearance operation is designed to root out violent criminals in that axis and they should avail Police information of persons seen treating bullet wounds or hiding within the community be reported to the nearest police station,â€ Police said.

Sunday Igboho: Why South-West govs are afraid to speak out -Lawyer