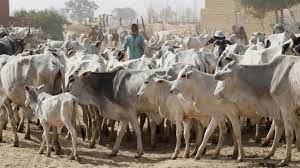 The Chairman, Senate Committee on Agriculture, Senator Abdullahi Adamu, has asked the Federal Government to go ahead with its plan to recover the old cattle grazing routes because herdsmen activities affect every part of the country.

Adamu, who also served as a two-time governor of Nasarawa State, disagreed with those who argued that the Federal Government should not dabble into grazing issues because it had no constitutional powers to do so.

The Senator, who spoke with our correspondent in Abuja, said herdsmen needed the cattle routes because of the challenges they usually faced when they wanted to adopt other forms of transportation.

He said the Federal Government should attend to the welfare of herdsmen just as it was providing basic amenities for others involved in private businesses across the country.

He said, â€œPeople who venture, in the face of security challenges, to take their cattle by road, get to some of the southern states, and at a roadblock, they were stopped and the vehicle burnt with the cattle.

â€œNow, what are we telling ourselves? Is the hatred that far? Is the innocent businessman or woman who takes cows to the South guilty of the facilities that they should get and they donâ€™t have?

â€œSpare part dealers in Abuja markets and other places have got facilities provided by the government, like clinics, tarred roads, electricity, water, and so on.

â€œWhat has the herdsman who rears cattle done? How is he benefiting from the government? Heâ€™s Nigerian and entitled to all the benefits the government provides. What is he getting?

â€œWe are dishonest; hatred and prejudices are killing genuinely positive initiatives. We should check this because we are destroying the basis of our togetherness.

â€œMore cows are eaten in the South than North. These herds of cattle do not drop from heaven. They are reared by people and moved by road, because we donâ€™t have a modern means of moving cattle.

â€œIn the north, I donâ€™t know of five farms that have got the kind of modern facilities for moving cattle, where they will feed, drink, and have veterinary attendants.

â€œI donâ€™t know about veterinary clinics along the routes like we used to have. So, if you donâ€™t want routes, how do you want herdsmen to convey the cattle?

â€œ(The President, Major General Muhamnadu Buhari, retd.) didnâ€™t create that problem, and he cannot singlehandedly create all the routes, facilities and make them available to the farmers.â€