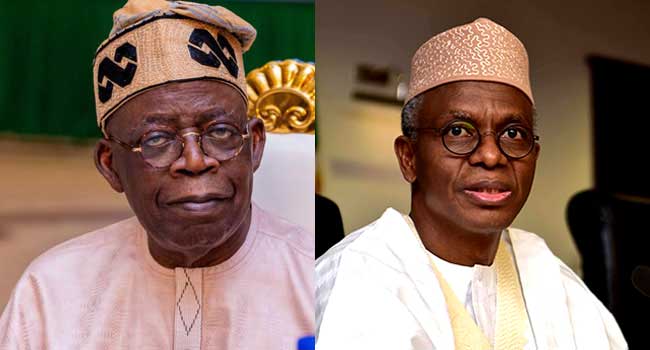 Disgruntled youths under the umbrella of the North East Stakeholders Forum of the All Progressives Congress have kicked against the open endorsement of Kaduna State Governor, Nasir el-Rufai, by Tinubu Support Organisation as the ideal candidate for the vice presidential slot.

The TSO had described El-Rufai as the best among the contenders being proposed as running mate to the APC presidential candidate, Asiwaju Bola Tinubu.

Director-General of Tinubu Support Organisation, Aminu Suleiman, while briefing newsmen in Kaduna on Monday said that they had decided after a consultative meeting with critical stakeholders of the party in the North-West geopolitical zone of the country.

Suleiman reiterated that, though the APC had many outstanding individuals among its ranks that could serve as Tinubu’s running mate, the North-West, as the single largest voting bloc in Nigeria, should be allowed to produce the next Vice President.

Reacting to the development, Chairman of the APC North-East Youth Stakeholders Forum, Haruna Sardauna, on Monday night urged Nigerians to reject the imposition of el-Rufai on the country.

Sardauna also called on the President, Major General Muhammadu Buhari (retd.); APC National Chairman, Senator Abdullahi Adamu, and the party’s standard bearer, not to take the focus away from the North-East region for justice and equity sake.

The North East should be given the slot, considering the sacrifices the region has made for the party in the 2015 and 2019 general elections. North-East APC Youth Stakeholders Forum on behalf of our region wants the party and President Muhammadu Buhari to zone the VP slot to our region unconditionally.
For President Muhammadu Buhari’s election as Nigeria’s president in 2015 and 2019, the area (North-East) donated more than 70 per cent of their votes in both elections. In our view, it’s time for the North-East to be recognized not only for their role in ousting a sitting President but also for supporting Buhari and the APC’s progressive principles.

“It’s not wrong to say this is our time, and it’s not right to deny this opportunity to our region, morally. Choosing a vice president from a different region would be political suicide because of the significant amount of votes from the region, especially when Atiku emerged as the PDP’s flagbearer.

“It is on the basis of the reality that a son of the region must serve as Vice President in order to secure our region’s bloc votes, we offer this recommendation.

“It is our hope that our dear President Muhammadu Buhari and the National Working Committee of our great party will take these concerns seriously and do the essential for the progress and success of our party and country,” he stated.

Pastors Harbouring Children Illegally In Ondo Church Not Our Members – CAN