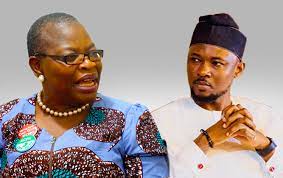 A former Minister of Education, Mrs. Oby Ezekwesili, has written a petition to the Inspector General of Police, Usman Baba, demanding the prosecution of blogger and social media influencer, Japheth Omojuwa, for alleged fraud, The PUNCH reports.

The petition titled, â€˜Petition Against Mr Japheth Omojuwa for Forgery, Fraudulent Misrepresentation and Fraudulent Use of the Name, Identity and Particulars of Mrs. Obiageli Ezekwesili as a Director of Alpha Reach Limited RC No: 1066507â€™ is dated April 14, 2021, but was received at the Force Headquarters on April 15.

In the petition, signed by Marshal Abubakar of Falana and Falana chambers, Ezekwesili said Omojuwa fraudulently listed her name as a director in his firm, Alpha Reach Company Limited without her permission, adding that she only got to know of the infraction when she was contacted by American news outlet, Buzzfeed, over a story on Alpha Reach.

Buzzfeed had reported that Alpha Reach ran a social media campaign for the release of alleged fraudster, Alex Saab, who is wanted in the United States. The news medium further reported that Ezekwesiliâ€™s name was listed as a director in company documents filed at the Corporate Affairs Commission.

â€œPlease find attached the referenced communication between our client and Mr. Japheth Omojuwa.â€

Ezekwesili, who was a co-founder of Transparency International, said when she was informed of the development, she quickly called Omojuwa to confirm if she was ever listed as a director at Alpha Reach but he said she was not.

The former minister subsequently attached as evidence, communications between herself and Omojuwa wherein the blogger allegedly stated that he never listed her as a director in the company.

Incidentally, Omojuwa had in an open letter addressed to Ezekwesili on Tuesday said he obtained her permission before listing her as a director.

The petition read in part, â€œIt is our brief that our client promptly contacted Japheth Omojuwa to confirm whether he forged her signature and other incorporation documents and processes but he informed her that the Alpha Reach Company Limited is his company and that she is not involved in it at all.

Ezekwesili further stated that she requested for the incorporation documents from Omojuwa and he promised to make them available to her within the week but he never did.

The petition further read, â€œJapheth Omojuwa never sought for her consent and /or participation in incorporating any company whatsoever and for any purpose whatsoever. The said Japheth Omojuwa neither sought for nor obtained requisite incorporation documents and information the CAC would require in processing the registration i.e the particulars of directors, share numbers, signature of directors, means of identification of directors and address etc.

â€œOur client reiterates for emphasis that she never filled or signed the statutory consent of first directors of Alpha Reach Company Limited in 2012 and or at anytime whatsoever.â€

The former minister told the IG that throughout the time she was fraudulently made a director in the company, no notice of meetings, annual returns, accounts or board resolutions were issued to her.

She noted that her name was eventually removed in 2017 but no special notice of proposed removal was ever issued or served on her.

The petition further read, â€œWe submit that the foregoing infractions amount to forgery, fraudulent misrepresentation and egregious breach of extant provisions of the Penal Code Law, the Administration of Criminal Justice Act, 2015 and the Companies and Allied Matters Act deserving of investigation and prosecution.â€

Omojuwa had in a letter on Tuesday claimed he duly obtained Ezekwesiliâ€™s permission before making her a director, adding that Kaduna State Governor, Nasir el-Rufai, was also a director at the firm.