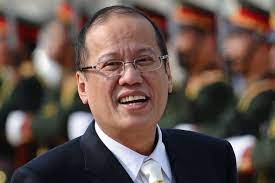 He died on Thursday morning at age 61.

â€œWe commiserate and condole with the family and loved ones of former president Benigno Simeon â€˜Noynoyâ€™ Aquino III as we extend our condolences on his untimely demise,â€ Roque said.

â€œWe are grateful to the former president for his contributions and services to the country, and we ask our people to offer a prayer for the eternal repose of the former chief executive.â€

Details about Aquinoâ€™s death were not announced.

Aquino, who was in office from 2010 to 2016, was born on February 8, 1960, to one of the Philippinesâ€™s wealthiest land-owning political families.