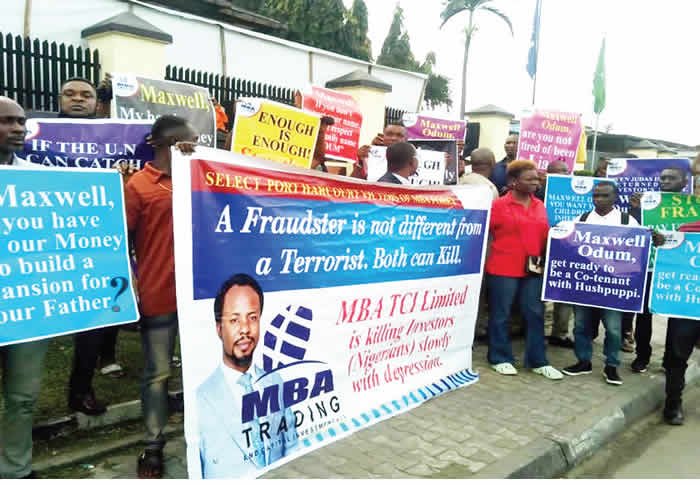 Victims of a failed foreign exchange (forex) trading company in Port Harcourt, Rivers State, on Wednesday, protested against the failure of the chief executive officer of the firm, Maxwell Odum, to pay them their dividends or return their capital after one year of investment.

The group threatened to dump the corpse of any investor that died from frustration over the collapse of the scheme at the doorstep of the founder’s family house.

The victims, who marched to the palace of the Paramount Ruler of Elekahia community, delivered a protest letter to the traditional ruler and sought his intervention.

He said, “Nigerians from all walks of life are disgruntled; some have died out of frustration, some are in deep pain and hospitalised because Maxwell Odum, an indigene of Elekahia community, defrauded Nigerians of billions of naira.

“We also use this opportunity to call on the President of the Federal Republic of Nigeria, Muhammadu Buhari, to shift a little focus on financial banditry, because Maxwell Odum is a financial terrorist and a bandit. He should be fished out. He (Odum) cannot be smarter than Nigeria.

“We are calling on the President to mandate the Inspector-General of Police, Usman Baba Alkali, to fish out Maxwell Odum.

“As investors, we have also made a decision that henceforth, any person that dies as a result of NBA forex fraud, we will liaise with the family of that victim and take the dead body to the house of Maxwell Odum in Elekahia.

“We know that it will be shameful, but he has caused us more shame; we are not backing out no matter how long it takes for us to get back our money.”

The Chairman, Rivers State Civil Society Organisations, Enefaa Georgwill, urged the traditional ruler to rise above sentiments, adding that his reputation was at stake.

“For us as civil society organisations, we appreciate the fact that the paramount ruler will hear from all sides; we know that his royal highness will live above board by not taking sides with his kinsmen and subjects,” Georgewill added.

Responding, the Paramount Ruler, Elekahia community, Anthony Akarolo, thanked the group for their peaceful conduct, even as he promised to investigate the claims and intervene.

He said, “This is a very serious matter and I won’t allow it to lie low; I am going to approach the parents and the boy himself to know how he came about all this.

“But I want you to apply diplomacy in what you do so that at the end of the day, you’ll get good results. But if you are violent, everything will go wrong.”

Efforts to reach Odum proved abortive as his mobile telephone did not connect.

Also, text messages sent to his phone were not replied to as of the time of filing this report.

The company, located along the busy Aba highway in Port Harcourt had been shut since December 2020.

During a previous protest by aggrieved investors last year, Odum, in an audio message, assured that he would refund their money, saying the company was going through some challenges.

But nothing has been heard from him since then.