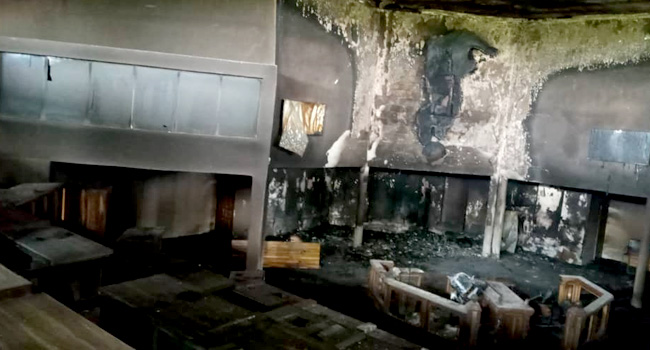 The upper chamber of Katsina House of Assembly was on Wednesday burnt in an overnight fire incident.

Members of the Assembly hold plenary sessions inside the chamber.

It was learnt that an assembly staff, who wanted to tidy up the chamber on Wednesday morning, opened its doors only to find out that the whole place had been gutted and raised the alarm.

Governor Aminu Masari, who visited the House of Assembly complex to assess the damage, expressed shock at the incident.

The House Deputy Chief Whip, Salisu Rimaye, who was also at the scene of the incident, said the root cause of the incident is unknown, adding that a team of electricians had begun processes to ascertain its cause.

He revealed that the fire was discovered when the clerk of the house instructed the Sergeant at Arm to go and clean up the chamber.

He added that the fire extinguishers in the assembly were initially used to curtail the fire before men of the state fire service joined in putting it out.

Rimaye said no life was lost in the incident.