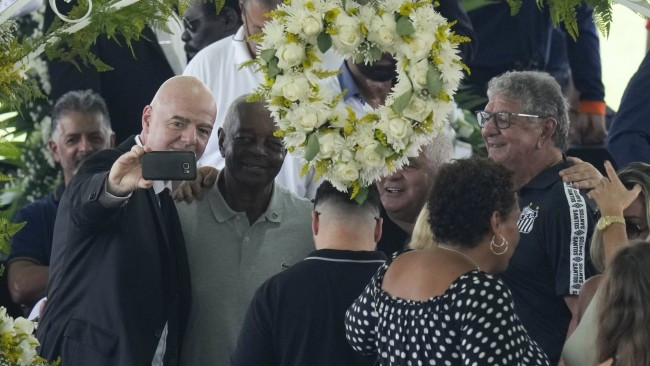 FIFA president Gianni Infantino has responded to criticism he has received after he took a selfie next to Pele’s open coffin at a ceremony for the Brazilian football icon on Monday, January 2.

Infantino was one of the thousands who travelled to Vila Belmiro stadium in Sao Paulo, Brazil to pay their respects to Pele, who died last week aged 82.

But the 52-year-old FIFA chief came under fire after he was seen posing for photographs away from Pele’s coffin.

In a post on Instagram on Wednesday, Infantino wrote: ‘Just landed from my trip to Brazil where I had the privilege to participate in the beautiful homage to Pele that took place at Vila Belmiro, in Santos.

‘I am dismayed after having been informed that I am apparently being criticised by some people for having taken a selfie and pictures at the ceremony yesterday.

‘I would like to clarify that I was both honoured and humbled that teammates and family members of the great Pele asked me if I could take a few photos with them. And obviously I immediately agreed.

‘In the case of the selfie, Pele’s teammates asked to do a selfie of all of us together but they didn’t know how to do it. So, to be helpful, I took the phone of one of them and took the photo of all of us for him.

‘If being helpful to a teammate of Pele creates criticism I’m happy to take it and will continue to be helpful wherever I can to those having contributed to write legendary pages of football.

‘I have so much respect and admiration for Pele and for that ceremony yesterday that I would never do anything that would be disrespectful in any way whatsoever.

‘I hope that those who published or said things without knowing and without seeking information could have the decency and courage to admit they were wrong and correct what they said.

‘The most important in any case is to pay tribute to King Pele, and whilst I humbly suggested that throughout our 211 member associations at least one football stadium or venue is named after him, we will set the example by giving the pitch in our headquarters the name “Estadio Pele – FIFA Zurich”. Um abraco e viva o Rei!’ 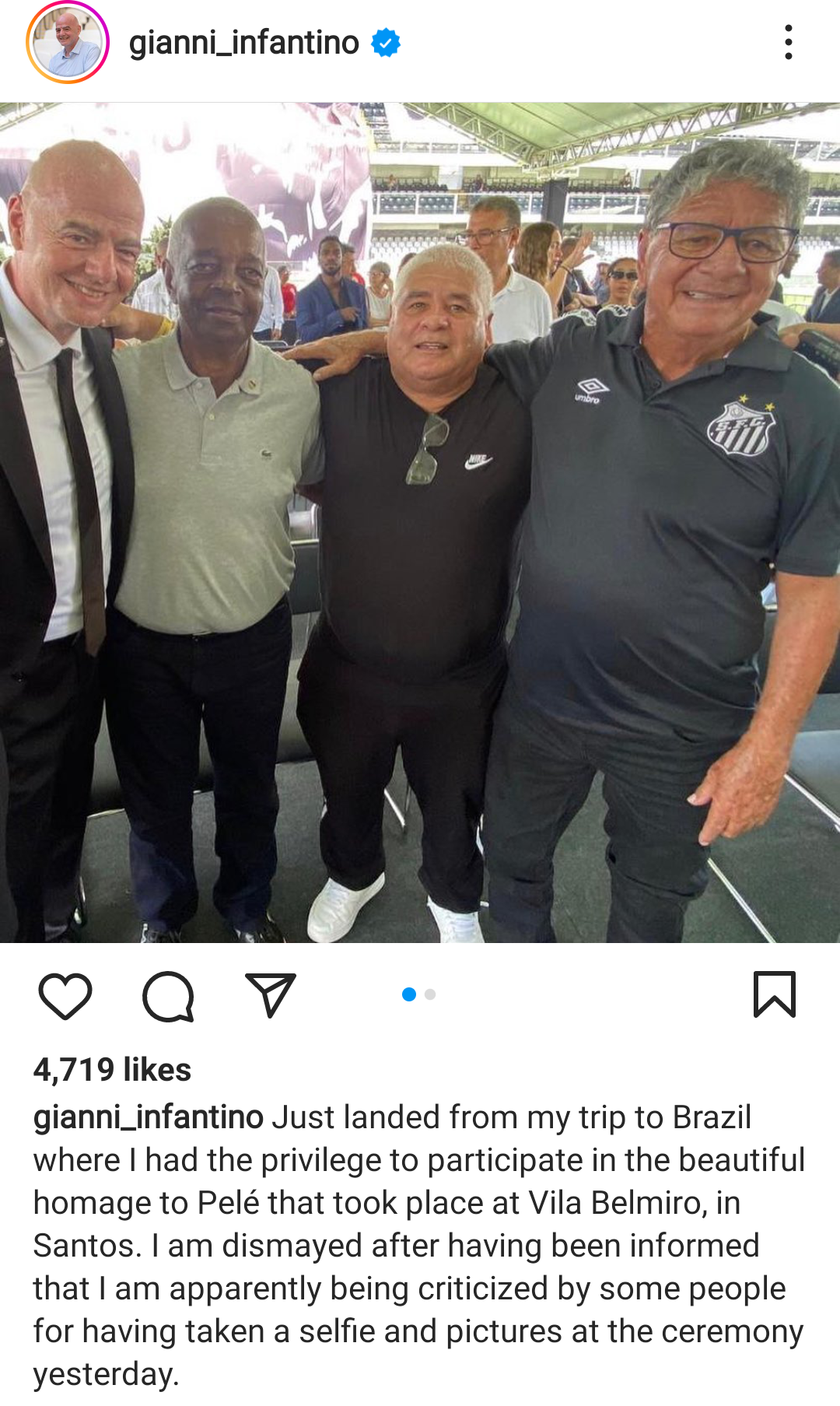 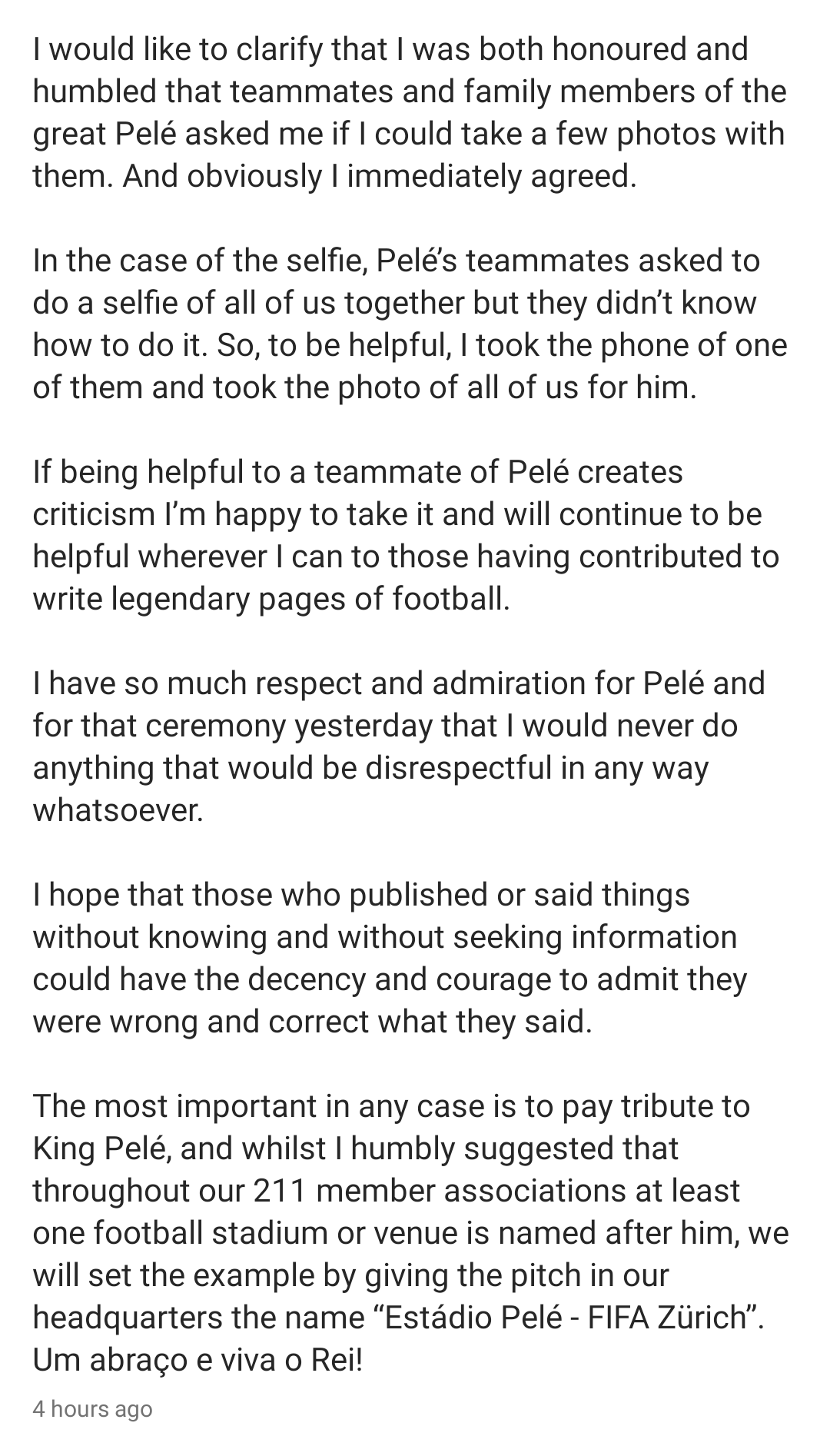 Economy: Major Indicators That Will Shape Nigeria In 2023