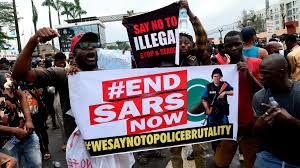 Protesters will on Wednesday storm the Lekki Toll Gate in a car procession to commemorate the first anniversary of last year’s #EndSARS nationwide protests.

This is despite the Lagos State Police Command warning against any form of #EndSARS protest on the basis that the State cannot afford a repeat of the destruction brought about by hoodlums who hijacked the protests of last year.

The organisers urged those who will partake in the memorial protest to come with their cars.

In one of the fliers seen by The Nation, the organisers urged the protesters to come en-masse as there would be a car procession around the Lekki toll gate and environs.

They advised protesters to stay in groups and also stay in their various vehicles for safety reasons.

The procession is scheduled to hold from 8am till 10am.

One of the artistes, who identified with the protesters, Folarin Falana popularly known as Falz in a post said: “We must never forget. We’re rolling up in cars tomorrow to drive through the tollgate.

“We know their way, so a procession of cars is the safest option to minimize police harassment. We have rides for people that need.”

A frontline member of the Feminist Coalition, which coordinated the protests last year, Ms Feyikemi Abudu said: “#EndSARSMemorial People were shot, injured and killed as they waved flags & sang. To memorialise them, we’re driving through the toll tmrw.

“We know them, so cars are to limit harassment. If you don’t have a car, txt the number. There’s space. Will be there at 8. Join if you can.”