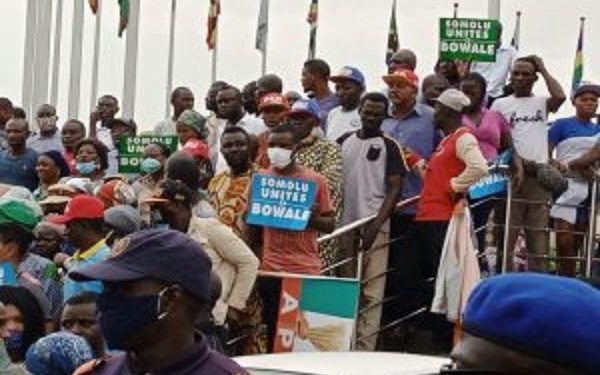 Some residents of Somolu Local Government Area of Lagos State on Thursday, marched peacefully to the Lagos State House of Assembly in protest against alleged imposition of a chairmanship candidate.

They alleged that Abdulhameed Salawu, popularly known as Dullar, was imposed on them as the chairmanship candidate for the upcoming local government election.

Salawu is the incumbent chairman.

One of the protesters, Jimi Olanrewaju, alleged that Salawu disrupted the primary election by locking up election officials in his office in Somolu.

He alleged that the incumbent Vice Chairman, Bowale Sosinmi, is the peopleâ€™s choice.

According to him, no election will hold in the area, if the party leadership fails to give the mandate to Sosinmi, as he had been denied the chance to run for election thrice.

Femi Olowonle-Denmark, who spoke on behalf of the protesters, alleged that the APC did not hold a primary election in Somolu.

He said that four of the contestants agreed to nominate Sosinmi, as their preferred candidate for the chairmanship position.

Olowonle-Denmark said the imposition would be the second time it is happening, and â€œthat is why we have appealed to Lagos State Governor, Babajide Sanwo-Olu, to prevail on the party leadership to ensure that the will of the people reigns supreme.â€

Lagos State Deputy Governor, Dr Obafemi Hamzat, who addressed the protesters, commended them for being peaceful.

Hamzat urged them to submit an agreement letter presenting Sosinmi as their consensus candidate, and promised that their leaders would be called to a roundtable to settle the issues amicably. (NAN)