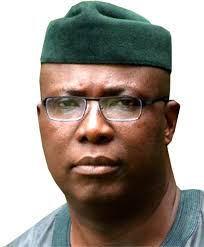 There is this Yoruba tale about a child who, on the demise of his mother, decided to embark on a search for those who borrowed money from her while she was alive. Little did he realise that his mother actually borrowed more than she lent out in her lifetime, as he later found out in the course of his search. Thus, rather than profiting from the venture, he became bankrupt in trying to pay up the outstanding debt.

The essence of this piece is neither to praise nor diss Gov. John Kayode Fayemi. Neither is it to reel out his achievements, which are already there in the public domain for people to see and judge. But it is to bring some facts home to Senator Babafemi Ojudu, believing that it is still not too late for him to make a u-turn from the path of political perdition he had been towing all this while.

Babafemi Ojudu is a native of Ado Ekiti. He was born in the town and he schooled there until he was about to enter the university, then he attended University of Ife.

Ojudu became prominent as an Ado indigene and through this, represented Ekiti Central, headquartered by Ado, as Senator in the 7th National Assembly between 2011 and 2015. No sooner did this terminate than Ojudu got appointed as the Special Adviser to President Muhammadu Buhari on Political Matters. He was deployed to the office of Vice President Yomi Osinbajo where he has since been serving till date.

It will therefore be appropriate to describe Ojudu as the most capped political player of the progressive stock from Ado Ekiti. And it is in this light that one would see and rate him as the most qualified and most endowed to contribute immensely to the development of the town.

However, if there are things Ojudu has contributed immensely to the development of not just Ado, but the entire state, they are fault-finding and blame game.

Not minding that as a Senator who represented the capital city in the 7th national assembly and subsequently as Special Adviser to the President, Ojudu cannot point to any reasonable contribution of his in the development of Ado in terms of project, talk more, Ekiti State. Yet he is ever ready to blame anyone but himself, who is well-connected at the top, for whatever he sees as requiring improvement. His most recent punching bag is the governor, Dr. Kayode Fayemi, who Ojudu himself would be quick to refer to as his bosom friend.

Nobody is asking Ojudu not to be apathetic to the course of his people. Neither is anyone shutting him out from being involved in the activities that will improve his immediate environment. But one thinks he should embrace fact-finding and not fault-finding as a strategy, with a view to objectively pointing out what is not very right, assuming he cannot correct them by himself.

A fact finder is an impartial person who is determined to find the facts or actualises a matter. A fault-finder on the other hand habitually finds fault or complains in a petty way to diminish his subject. He is quick to judge, minimises his subject’s accomplishments or demote him to an underdog.

When it comes to matters affecting Ekiti State, Ojudu is a fault finder and not a fact finder. He sees no good, hears no good, speaks no good, thinks no good, and as such does no good.

Recently Ojudu visited Ekiti in company of the Minister of Interior, Ogbeni Rauf Aregbesola, and paid an unscheduled visit to Governor Fayemi in the latter’s office. He, Ojudu, was the first person to interpret and publish the outcome of the meeting as confidential and “a family affair.” He even promised that he would subsequently repeat the visit to the governor for further intimate discussions on the way forward for Ekiti. But Ojudu’s subsequent actions run counter to what he told the public.

Ojudu, ordinarily, should be a national figure, but he has decided to concentrate all his energy on Ekiti. No one remembers any political advice Ojudu ever gave the President, if any. Rather one would recall a series of faux pas he has made in his attempt at commenting on actions already taken by the same President he claimed to be advising.

Even at that, one is bound to ask if indeed Ojudu means well for Ekiti Politics in his criticism of the present administration and, of course, those of the preceding ones. When you think of Ekiti Politics and those who have played prominent roles between 1999 and now, there is a position you cannot take Ojudu away from: it is that of a trash talker. He derives his prominence from talking trash about those who are labouring to build the state. The situation one finds most surprising is his constant dithering of his “bosom friend,” Fayemi and pretending that he is doing it for the good of the state. Which state if one may ask? The state that cannot boast of Ojudu’s personal touch in terms of development? The state that Ojudu, a national figure, does not consider it necessary to attract anything worthwhile from the federal? Ojudu should rather be seen for who he is; a self-serving leader, and not a patriotic one.

But Ojudu has forgotten one thing: the X factor in all one does or claims to be. Ojudu has forgotten the place of destiny. He places self above God and believes he can talk his way to the top. So, here is a strong word of advice for Ojudu, if indeed he wants to go further in politics: He should avoid concentrating much energy on playing out the fault of others, otherwise he will keep being at fault himself. Whereas if he starts focusing on solutions, he will be seen as a solution. Rather than being notorious for finding faults; Ojudu should be a solution digger!

Ojudu is a product of the _Leemo_ school of politics. _Leemo_ is a Yoruba coinage that simply means “Haul it at him.” And here is how it works:
Look for a half-truth, colour it with a strong lie and keep hauling it at your enemy until it sticks, so people can see him for who he is not. And while he is still trying to wriggle out of it, look for another, a much bigger one and haul it at him again. Keep doing this repeatedly with the belief that a lie repeatedly told is often taken for the truth. You can be sure that that enemy of yours won’t come out unscathed. That is _Leemo_ for you.

Ojudu is a proponent of _Leemo_ (propaganda) school of politics. He is of the strong view that when one keeps trash-talking a sitting governor’s achievements, such governor will be forced to reckon with one and invite one over for a win-win settlement. That is, one will be asked to name his or her terms, and in so doing, one would eventually get a large pie.

But this time around, Ojudu seems to have chosen a wrong target. If he got it right in JKF1, not so in JKF2. Pity!

IPOB’s Sit-At-Home: What Southeast Candidates Who Missed WASSCE Must Do -FG