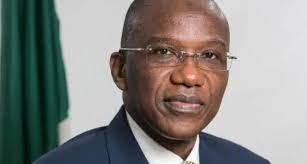 The Economic and Financial Crimes Commission (EFCC) has refused to speak on the invitation of Ahmed Kuru, the Managing Director of Assets Management Company of Nigeria (AMCON) to its office for questioning.

A source in the Commission confirmed to Nairametrics that the AMCON boss was with the Commission on Wednesday for some enquiry but did not however disclose what he was invited for.

Efforts to get the reaction of the EFCC’s Spokesperson, Wilson Uwujaren, was not fruitful as he refused to comment in regard of the matter.

Mr Kuru, who is currently serving his second term as the AMCON boss, was appointed by President Buhari in August 2015.

Prior to that, he was the Group Managing Director of Enterprise Bank Limited.