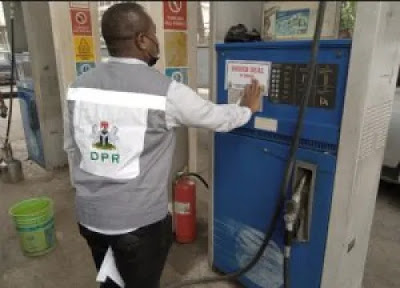 The Department of Petroleum Resources (DPR) on Wednesday sealed two filling stations in Lagos for under-dispensing of petrol.

“The sealed stations were under-dispensing and there are sanctions. They will have to, first of all, pay their sanctions and they will rectify their pumps to the acceptable standard.

“Then we will come back and re-evaluate the pumps before they can be allowed to reopen,” Cardoso said.

He said the intensification of routine surveillance by the DPR in Lagos was aimed at monitoring product price, quality, availability, pump efficiency as well as water ingress in some tanks.

Cardoso said the petrol stations inspected were selling fuel between N162 to N165 per litre which was the approved price band by the government.

“Routine surveillance is continuous and we are not the only one doing it. We have several teams going round in different places,” he said.

Cardoso advised members of the public against panic buying ahead of the forthcoming Easter season, noting that there was product sufficiency in Lagos State.