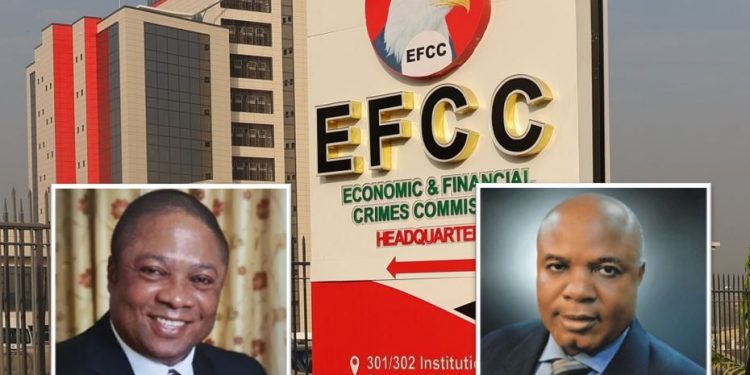 Sir Daniel Chukwudozie (Dozzy Oil) and his counterpart, Cletus Ibeto are in a fight to finish over an alleged N4.8bn fraud.

The Economic and Financial Crimes Commission (EFCC) and Sir Daniel Chukwudozie, Chairman of Dozzy Oil and Gas LTD, recently asked a Rivers State High Court to dismiss a suit filed by Chief Cletus Ibeto, Chairman of the Ibeto Group, seeking to stop the EFCC from investigating him over a 4.8 billion fraud.

Ibeto is asking the court to halt the EFCC from investigating charges of fraud, forgery, and criminal breach of trust lodged against him by Sir Daniel Chukwudozie (Dozzy Oil and Gas Limited) in the case PHC/268/FHR/2022.

Ibeto had filed an originating application on notice with the court, requesting that the court rule that the EFCC lacked the authority to intervene in land disputes.

He also asked the court to declare the commission’s alleged harassment of him unlawful, prevent him from being arrested, and order the commission to pay him N500 million in damages for depriving him of his fundamental human rights as a Nigerian citizen.

When the case came up for hearing, the EFCC’s counsel, Simon Ibekwute, drew the court’s attention to his preliminary objection filed on February 21, 2022, claiming that the court lacked jurisdiction to hear the case because the alleged violation of the applicant’s fundamental human rights occurred in Abuja.
The EFCC’s counsel also filed an application for a time extension, claiming that his process had exceeded the legal deadline.

In response, Henry Bello, who represented Onyechi Ikpeazu, SAN, Ibeto’s lead attorney, told the court that he had yet to file his response to the EFCC’s preliminary objection.

After hearing the EFCC’s motion for extension of time, which was not opposed by counsel for Ibeto and Chukwudozie, and hearing all of the parties’ motions and counter-motions, the trial Judge, Justice Boma Diepiri, adjourned the hearing on all parties’ motions and counter-motions to April 12, 2022, and directed them to file all of their processes before the adjourned date in order for the court to hear the matter and possibly fix a date for judgement.

The EFCC has asked Ibeto to show documents to back up his allegation that he owns the block of property spanning 20.293 hectares that he sold to Sir Daniel Chukwudozie, Chairman of Dozzy Oil and Gas LTD.

However, after reportedly failing to submit the documents, he went to the Port Harcourt High Court to challenge the constitutionality of the EFCC’s invitation.

ENigeria Newspaper reports that According to court documents received, Chukwudozie claimed that he was approached by Ibeto to buy a block of land in Reclamation Layout Phase 2 Port Harcourt, but that the property did not belong to the claimant (Ibeto) and his firms as he originally claimed.