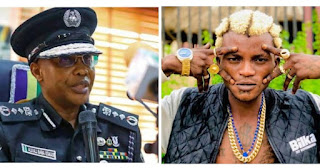 This was made known through a statement signed by the Force PRO, CSP Olumuyiwa Adejobi and made available to National Association of Online Security Reporters.

Portable had claimed in a trending video uploaded on his Instagram handle @portablebaeby, which is now deleted that he founded the dreadful ‘Ajah Boys’ cult group, likewise the ‘One-million Boys’ cult group which both terrorized some parts of Lagos State, during the COVID-19 lockdown in 2020.

The Zah Zuh crooner, who spoke in Yoruba dialect, boasted: “Open your ears and hear me. Have you heard about Ajah Boys, One Million Boys, I founded them. Go and ask Sammy Larry.”

National Association of Online Security Reporters, NAOSRE has applauded the prompt action of the Nigerian Police Force to the allegations of the Zah Zuh crooner.

According to the President of the association, Comrade Femi Oyewale, the necessity for effective security starts with reacting to little informations that can be useful in sanitizing our society. Especially a case where someone willingly cleared the air.

Oyewale re affirmed its commitment to continuously offer publicity supports to security agencies in a manner that could bridge prevailing distrust between citizens and officers in uniform.

He stressed the necessity for effective communication about the patriotic activities of security officers so that the civil society would be well abreast of issues to avoid conflict of interests.

However, in a follow-up video posted on his handle, Portable denied creating the dreaded groups, he said he was referring to his fans as one-million boys and have never had any connection with the cult groups.

NAOSRE, thereafter promise to keep the public updated through out the investigation process.

Advertisement
Related Topics:portable
Up Next