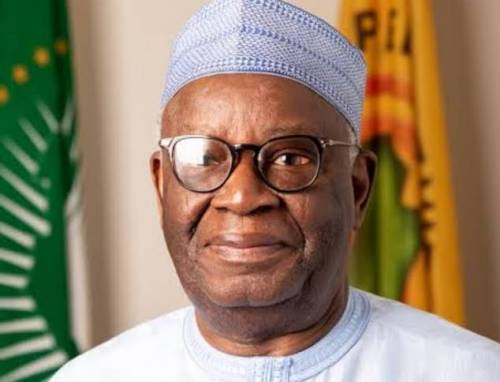 Buhari’s Chief Of Staff, Ibrahim Agboola Gambari and other top aides in Aso Rock are going to the US ahead of the UNGA slated for September 14.

This online medium learnt that part of the mandate of the top government officials was to try to infiltrate the ranks of Nigeria’s self-determination groups, which earlier announced that they would storm the UN Assembly with demands for referendum.

President Muhammadu Buhari’s Chief of Staff, Prof Ibrahim Gambari, among other officials, is travelling to the United States on Thursday ahead of the United Nations General Assembly billed to hold by September 14.

The Editor Nigeria learnt that part of the mandate of the top government officials was to try to infiltrate the ranks of Nigeria’s self-determination groups, which earlier announced that they would storm the UN Assembly with demands for referendum.

According to SaharaReporters , Buhari would be attending the UN Assembly, the entourage led by Gambari, who is a diplomat and former top UN official, was sent ahead to weaken the strengths of the agitation groups before the President’s arrival.

“The UN programme is starting September 18. The Chief of Staff is leaving for USA tomorrow (Thursday) with some people working with him, including his personal Assistant, Luqman Bosun Emiola. No one knows when they will be back but they are not supposed to have any business with the President’s trip.

“Buhari will be attending the UN General Assembly but the Chief of Staff already left,” the source added.

SaharaReporters had on August 11 reported that agitation groups in the country under the Nigerian Indigenous Nationalities Alliance for Self-Determination said they would hold a one million march at the UN Headquarters in New York, to reiterate the demand for a referendum on self-determination and abolition of the 1999 Constitution of Nigeria.

NINAS is an umbrella body of self-determination movements in the South-South, South-East, Middle Belt and South-West (Ilana Omo Oodua).

The one million march is scheduled to hold between September 14 and 21, 2021 when the 76th session of the United Nations General Assembly would hold in the United States.

This had been disclosed by NINAS leaders and members of the group who signed the Constitutional Force Majure declared on December 16, 2020, rejecting the 1999 Constitution of Nigeria and calling for a UN supervised referendum.

In a statement, the communications manager for the group, Maxwell Adeleye, had said the march would be led by renowned historian and emeritus professor, Banji Akintoye. Other participants include Yusuf Turaki, a respected scholar; Secretary-General of NINAS, Tony Nnadi; pioneer Commissioner for Education in Osun State and National Chairman of Ilana Omo Oodua, Wale Adeniran, among others.

According to the statement, the group seeks to dismantle the purported “fraudulent 1999 Constitution,” end the “unworkable” unitary union that the constitution has foisted on the people and champion the processes for self-determination by which sovereignty would be restored to the constituent regions.

It also called on all indigenous people from southern Nigeria and the Middle Belt around the world to unite and stand together in solidarity in their demand for the restoration of their sovereignty, inalienable right to their self-determination, assets and right to freely choose their association with any state.

It was stated that during the freedom march, a demand would be made to the United Nations to send a peacekeeping force to Nigeria to save embattled indigenes who are daily massacred by criminal elements among Fulani herdsmen and other terrorists, including Boko Haram and the Islamic State.

“What will be happening at UNGA is that the members of Ilana Omo Oodua under the leadership of Emeritus Professor Banji Akintoye, alongside other members of NINAS from the Lower Niger and Middle Belt of Nigeria, hold a one million march opposite the U.N Headquarters in New York, from September 14 to 21, 2021 to demand for a referendum to decide on the rights to self-determination of the people, who want an end to unitary systems of Nigeria, which has been turned into an apartheid state.

“We shall also be demanding, first and foremost, for the abolition of the 1999 Constitution of Nigeria, which we have shown to be a fraud perpetrated against the people of the South and Middle Belt of Nigeria given that the people did not make it. All sons and daughters of the Lower Niger (South East, South-South), South West and Middle Belt’s clans, living in the US are being mobilised to stand up for their indigenous nationalities by participating in the one week one million march for the liberation of their people,” the statement had said.