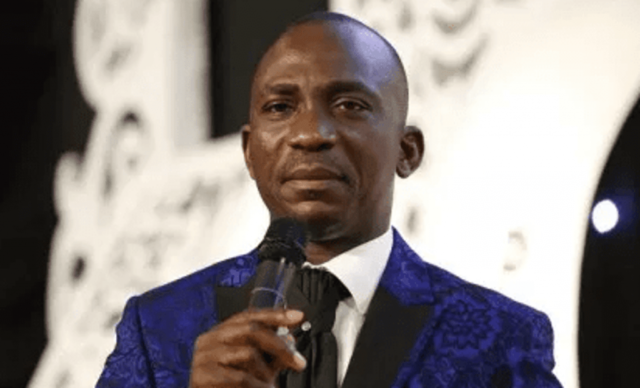 The Senior Pastor of Dunamis Church International Gospel Centre,Â Paul Enenche, has condemned the move by some activists to use the church as a protest ground.

Enenche faulted the move after the activists stormed the churchâ€™s headquarters Along Airport Road, Glory Dome Abuja on Sunday wearing a #BuhariMustGo T-shirt.

The Editor Nigeria recalls that operatives of the Department of State Services on Sunday arrested some anti-Buhari protesters that stormed the church on Sunday.

The cleric while reacting to the development in a statement released through his spokesman, Adah Ochowechi, said the church is not a political setting where such activities should take place.

He, however, distanced the church security operatives from the arrest, adding that they were arrested by DSS outside the church premises.

The statement reads, â€œOur attention has been drawn to a misleading caption in the media space about the arrest and detention of youths in our church on Sunday 4th July 2022.â€

â€œThe narrative being peddled is that some youths wearing T-shirts branded with #BuhariMustGo merely came to church and walked up to the alter as first-timers and were arrested by the church and handed over to DSS.

â€œNothing can be further than the truth. The church holds three services every Sunday and the Senior Pastor, Dr Paul Enenche preaches in all the services. After the sermon in the first service on that Sunday, an altar call was made to which many people came out, including the said youths, and nothing happened to them.

â€œNo one questioned the legality or otherwise of the inscription on the T-shirts.

â€œHowever, soon after their departure from the alter, they swung into a protest with blaring trumpet and saxophone right from the exit door of the church. At the same time, the event was been covered and live-streamed with the background shot of the church building and those and those of the thronging crowd both exiting and entering the sanctuary for the next service.â€

â€œThis appears intriguing for many reasons:

â€œNo one knew who they were or where they came from.â€

â€œNo one knew the organization they represented or their ultimate agenda until the DSS apprehended them.â€

â€œNo standard rule of engagement was followed as the merely sneaked into the church and swung into protest on a holy day of service.â€

â€œMoreover, the church is not an activism ground but a centre for the projection of truth against all forms of evil. The church is non-political and non-partisan and thus not an appropriate ground for political protests. It is not the seat of government where those been protested against residing.â€

â€œWe wish to state categorically that Dunamis International Gospel Center has no hand in the arrest, and detention of the said youths as they were arrested outside the premises of the church. The church has no right to arrest and detain people and has no detention custody. The right of arrest and detention resides with government security agencies.â€

Advertisement
Related Topics:Dunamis Church
Up Next

PIB: A Bad Deal For Host Communities By Oke Umurhohwo

University Students Protest Against Imposition of Uniforms By Management