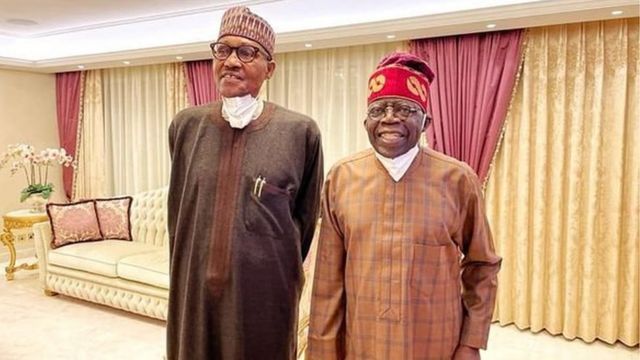 The two prominent leaders do not need any introduction. They are well known all over our world. One is leading the richest and most populous nation in Africa and indeed the black people of the world. The other one is leading the economic capital of West Africa. He was elected to lead the sixth largest economy in Africa barely 22 years ago. He was in office from 1999 to 2007 and has since 2007 till the present, been in power in the main nation within our nation. Yes, he rules in the commercial capital that harbours the only two functional sea ports in the country of more than two hundred million people scattered in six geo-political regions.

The more powerful leader of our nation today had contested the position three times and failed before 2015 when he borrowed some political brilliance from the other more influential national leader of the ruling party – that year (2015). Those who knew the subterfuge approach that brought Muhammadu Buhari to power in 2015 continue to insist that the Great ‘Jagaban Borgu’, Bola Tinubu actually combined resources with another wise investor from Rivers State and an Artful Dodger from Kwara State, among other resourceful risk-takers who invested heavily in the man they advertised to us as the only solution to all our corrupt orientations.

This isn’t a piece to blame the 2015 wise investment of the ‘Three Musketeers’ who saw raw gullibility of men and imposed what was thrice a hard sell. It is not a time of lamentation about those who stirred the conscience of the nation in 2015 when some rainmakers triggered the rain that has been beating us since. This is just a note to deconstruct the significance or should I say the consequences of a chance meeting in London last week between the two great leaders I have been blabbing about – Buhari and Tinubu.

They are great leaders. That is why they are in a great country where their minor ailments are being examined by some of the world’s greatest medical scientists so that they can continue their great work in their great ‘nations’ waiting for the greatness even Mandela foresaw before he flew away to the great beyond.

Not many of us would recall that I have noted several times here that I trained originally as a teacher – in a Teacher Training College when men had chests to believe in their children’s teachers. And so I know the power of repetition in classroom operations. That is why I would like to repeat the point I have been making since 2017 here when our elected leader on whose table the buck should really stop that it is not gratifying to note that the leader of the most robust economy in Africa has been flying to London for medical examination more than 60 years after the same London granted us independence and republican status.

The other day some cheeky and unchiselled commentators on digital platforms were even arguing that it is not good enough for us that our leader has been travelling to London for medical check-up; when his only son had a power-bike accident, he was flown to Germany for proper treatment and whenever his wife isn’t feeling fine she always flies to the United Arabs Emirate (UAE) where another great man and our former vice president, Atiku Abubakar prefers as his Plan-B home. Great men’s charity should always begin from abroad.

The other big man, whose cognomen is ‘Oba l’ola’, Yoruba people’s metaphor for ‘tomorrow’s king’ wasn’t around in his domain at the last Sallah celebration. He wasn’t in his empire a few weeks ago too when the crucial local government council elections were held. Yet his absence wasn’t noticed as they, as usual, won all the Council seats. Anyway that was how his supporters and indeed his people confirmed his rumoured medical condition, which has just been confirmed that it wasn’t a big deal, after all.

He was seen with the commander-in-chief he assisted to seize, I mean return to power in 2015. It can now be seen by all of us who have been circulating some dangerous intelligence that despite the secret pact so many eye-witnesses have hinted at, the lanky beneficiary of his 2015 stratagem would not honour the covenant to hand over to him, after all. We have all seen the great friends, political mentor and mentee together in London where it is said they have always met to renew their loyalty to each other concerning that #Covenant-2023.

All doubting Thomases have thus seen that the two friends are as fit as fiddle. Don’t misconstrue the walking stick you thought you saw: it is a symbol of wisdom, which comes with old age. It is also a badge of royalty for ‘Oba l’ola’ (Furure King) in the old Western region. Don’t read their body language anyhow in the United Kingdom. They are great men and we have all felt great seeing them together in high spirit. They need our great prayers for good health and indeed healing too for our great nation as Nigeria’s leader returned home at the weekend.

It wasn’t clear whether ‘Oba l’ola’ too returned home at the weekend.

And so as our leader has returned to his kingdom after the great summit on education and examination of his health in the United Kingdom, he should listen to the voices of wisdom and reason, which most of us have been reiterating since 2017 that Nigeria’s commander-in-chief should take advantage of his summits and health-care experiences in London to invest purposefully in even a few hospitals where our leaders and our people and indeed Africans can also be cared for. Recall that Mandela told us before he joined his ancestors that Africa and indeed the black race would wait for Nigeria to lead Africa and the black race. Do you want me to quote Madiba again here?
‘The world will not respect Africa until Nigeria earns that respect. The black people of the world need Nigeria to be great as a source of pride and confidence’.

One thing is clear from this Madiba’s thought: The world will not respect Nigeria and indeed the black people of the world will not need Nigeria as a source of pride and confidence if Nigerian leaders at all levels cannot invest robustly in social services, notably education and health and human services. The world Mandela was talking about is beginning to look in the direction of Ghana because instead of investing in better universities, Nigerian leaders are strangely investing in more meretricious universities that could not produce even a department of computer science that could manage artificial intelligence centre for Google in West Africa. That was how the hi-tech giant found one in Ghana that has better but fewer universities than even Ogun state.

Before Nigeria began its war on #Twitter corporation too, the company had found Ghana as a better place to site its operations centre in West Africa, leaving the giant of Africa in the cold.

I think our great ‘Asiwaju of Lagos’, needs to reflect deeply too on why Lagos, our economic capital he has been shaping for more than 22 years hasn’t impressed the big data firms, Google and Twitter corporations, despite Mark Zuckerberg’s prediction that Yaba, Lagos would be a technology hub when he was in Lagos in August 2016.

Zuckerberg, founder and CEO of Facebook, was in Nigeria on his first trip to Africa, using his time in the country to visit the Yaba technology hub in Lagos, meet with developers and partners, and explore Nollywood.

According to reports then, Zuckerberg was in Nigeria to “listen and learn” and take ideas back to California on how Facebook could better support tech development and entrepreneurship across Africa.

One of his first stops on the trip was a ‘Summer of Code Camp’ at the Co-Creation Hub (CcHub) in Yaba, known as Nigeria’s Silicon Valley. CcHub opened in 2011 and at the time didn’t even have an office. Five years later, there were three floors and the roof of a building when Facebook CEO came calling. At CcHub people can learn how to code, developers can get help launching their first products, and find mentors and funding.
At CcHub in 2016, Zuckerberg met with developers like Temi Giwa, who runs a platform called ‘Life Bank’. Life Bank saves lives by mobilising blood donations, taking inventory of all blood available in the country and delivering blood in the right condition to where it is needed.
After visiting CcHub, Zuckerberg said: “This is my first trip to sub-Saharan Africa. I’ll be meeting with developers and entrepreneurs, and learning about the startup ecosystem in Nigeria…The energy here is amazing and I’m excited to learn as much as I can…The first place I got to visit was the Co-creation Hub Nigeria (CcHUB) in Yaba. I got to talk to kids at a summer coding camp and entrepreneurs who come to CcHub to build and launch their apps. I’m looking forward to meeting more people in Nigeria.”

Zuckerberg went to Andela, an engineering organisation building the next generation of technical leaders in Africa. Andela is a business that recruits the most talented technologists in Africa and shapes them into world-class developers through a four-year technical leadership programme. His visit then reinforced not only his support of Andela’s mission, but his belief that indeed the next generation of great technology leaders would come out of Lagos, Nigeria and cities across Africa.

Zuckerberg’s visit demonstrates to all Nigerian developers and entrepreneurs that they had caught the attention of the tech world, and they are capable of succeeding on a truly global level.

What happened to that Hub since 2016 when Zukerberg left Nigeria? Tinubu, the man who has been producing governors and political leaders for Lagos and most Southwest states should not allow the answer to that question to blow in the wind.

And so the urgent task before Buhari and Tinubu who rule Nigeria from Abuja and Lagos is that next time, we would like to see them after their medical examination in a Nigerian hospital. As they return home, the two great men should note that their greatness will be diminished by their abysmal failure to invest in even two British-class hospitals in Abuja and Lagos where they rule Nigeria. We don’t want to see them abroad together again on any health grounds. They need to pay attention to at least the University of Abuja Teaching Hospital,(UATH), National Hospital Abuja, (NHA), University of Lagos Teaching Hospital (LUTH) and Lagos State University Teaching Hospital (LASUTH). These are their low hanging fruits they can easily invest in to prevent the reproach of a great nation whose great leaders always fly over ill-equipped hospitals to get treated in great hospitals abroad.
##