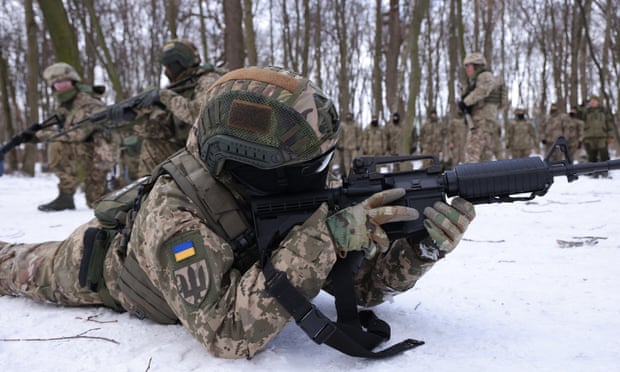 The US government has ordered the families of all American personnel at the US embassy in Ukraine to leave the country amid heightened fears of a Russian invasion.

The state department told the dependents of staffers at the US embassy in Kyiv that they must leave the country. It also said that non-essential embassy staff could leave Ukraine at government expense.

US officials stressed the Kyiv embassy will remain open and that Sunday’s announcement does not constitute an evacuation. The move had been under consideration for some time and does not reflect an easing of US support for Ukraine, the officials said.

“Military action by Russia could come at any time,” the US embassy said. Officials “will not be in a position to evacuate American citizens in such a contingency, so US citizens currently present in Ukraine should plan accordingly,” it added.

The statement came amid rising tensions about Russia’s military buildup on the Ukraine border that were not eased during talks Friday between secretary of state Antony Blinken and Russian foreign minister Sergey Lavrov in Geneva.

Ahead of a foreign ministers meeting in Brussels on Monday, a senior European official said the EU would be ready to launch sanctions “within days” if Russian troops launch an invasion.

Ukraine was also said to be reacting “seriously” to UK Foreign Office allegations that Moscow has plans to invade the country and install a puppet government, according to a senior government adviser, adding that Kyiv is resisting Russian efforts to destabilise its government and economy.

The Foreign Office claims that Moscow may topple the government and install Yevhen Murayev, a former MP who controls a pro-Russia television station, were met with shock and some scepticism in Ukrainian political and media circles on Sunday.

The Foreign Office made the allegations as the UK pledged to take a more aggressive posture over Russia’s buildup of more than 100,000 troops and weaponry on the border with Ukraine.

Murayev himself denied that he was involved in any plot, telling the Observer he had been banned from entering Russia and was in a conflict with a close ally of Vladimir Putin. “It isn’t very logical,” he said.

The Foreign Office has not provided any evidence to support the allegations, which came as Boris Johnson’s domestic political troubles deepened.

British sources emphasised on Sunday afternoon that the coup plot warning on Saturday followed a UK intelligence assessment, a different formulation from earlier briefings that had suggested it was based on “US-led intelligence”.

The UK allegation came days after the US alleged that Russian intelligence was recruiting current and former Ukrainian government officials to take over the government in Kyiv and cooperate with a Russian occupying force.

The accusations have increased tensions as discussions rage about how best to deter Vladimir Putin from launching a new invasion of Ukraine. Russian tanks and artillery, military vehicles and fighter aircraft continued to arrive within striking distance of Ukraine’s borders this weekend, and Russian troops have been sighted less than 20 miles from the border.

Moscow has announced sweeping naval exercises that will put its ships in close proximity with Nato forces while potentially positioning landing craft for an amphibious assault on Ukraine’s southern coast.

Blinken said the US and its allies would deliver a “swift, severe and united response” if Russia invades Ukraine.

The Russian president, Blinken said, must choose between the “preferred path of diplomacy and dialogue” or “Russian aggression and massive consequences”. The US, Nato, and Europe stood ready to deal with any eventuality, he said.

“We’ve been very clear that if there is any further Russian aggression in terms of sending Russian forces into Ukraine, there will be a swift, severe and united response from the United States and Europe,” Blinken told CBS’s Face the Nation, echoing the message he said he delivered to the Russian foreign minister, Sergei Lavrov, in “frank and substantive” talks in Geneva last week.

“We’ve been equally clear that Russia engages in other tactics short of sending forces into Ukraine, or other countries, hybrid actions, cyber-attacks, efforts to bring the government down. There, too, I’m confident based on the many consultations I’ve had with European allies and partners that there will be a swift, calibrated and also united response.”

Blinken would not say if that response included committing US forces, but told CNN’s State of the Union the alliance was looking at “very practical and important measures”, including military options.

On Sunday, the US state department said: “The security conditions, particularly along Ukraine’s borders, in Russia-occupied Crimea, and in Russia-controlled eastern Ukraine, are unpredictable and can deteriorate with little notice. Demonstrations, which have turned violent at times, regularly occur throughout Ukraine, including in Kyiv.

The department’s travel advisory, which had warned against traveling to Ukraine because of Covid-19 as well as the tensions over Russia, was changed Sunday to carry a stronger warning.

The travel advisory for Russia was also changed: “Do not travel to Russia due to ongoing tension along the border with Ukraine, the potential for harassment against US citizens, the embassy’s limited ability to assist US citizens in Russia, Covid-19 and related entry restrictions, terrorism, harassment by Russian government security officials, and the arbitrary enforcement of local law.”

The state department would not say how many Americans it believes are currently in Ukraine. US citizens are not required to register with embassies when they arrive or plan to stay abroad for extended periods.