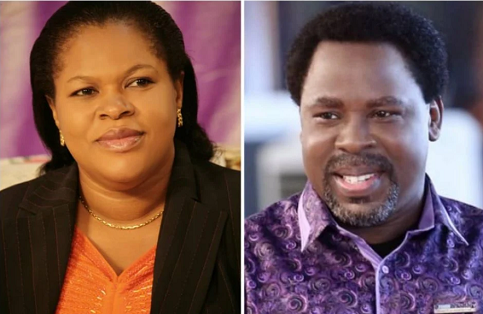 The widow said this while delivering a heartrending tribute to her later husband at the church premises in Ikotun, Lagos.

She described the late man of God as a loving husband and father and one who created time for his family despite his busy spiritual schedule.

She however thanked God for making her wife to such a great husband and spiritual father, and said, â€œthank you for choosing meâ€

Speaking further, she described her late husband as one who did not understand the word impossible, saying; â€œWe will keep the light burning. I shall forever be proud to be your wife.â€

â€œYou are not dead. I know that,â€ she added, describing Joshuaâ€™s passing as â€˜very peaceful.â€™

Sleep on my love. Sleep on My Godâ€™s general.â€

In her own tribute, Serah, the first daughter of the late prophet said â€œI am so proud of my father. Dad told me that the work of God is so beautiful to do.

â€œâ€™Indeed he lived a prayerful life, I recall how one day we prayed for 45 minutes and after that my knees were aching. After that he told me that the spirit is willing but the body is weak.

â€œI will truly miss our conversation. If anyone lived a fulfilling and yet enigmatic life, it was you. My dad had the biggest heart that I know of. What a life you lived- such a legend and exemplary light.â€

Also paying tribute to her dad, Heart Joshua simply said; â€œThank you for coming out to celebrate my fatherâ€™s profitable lifeâ€

Advertisement
Related Topics:TB Joshua
Up Next

Guardiola Reveals What La Liga Must Do To Be Stronger