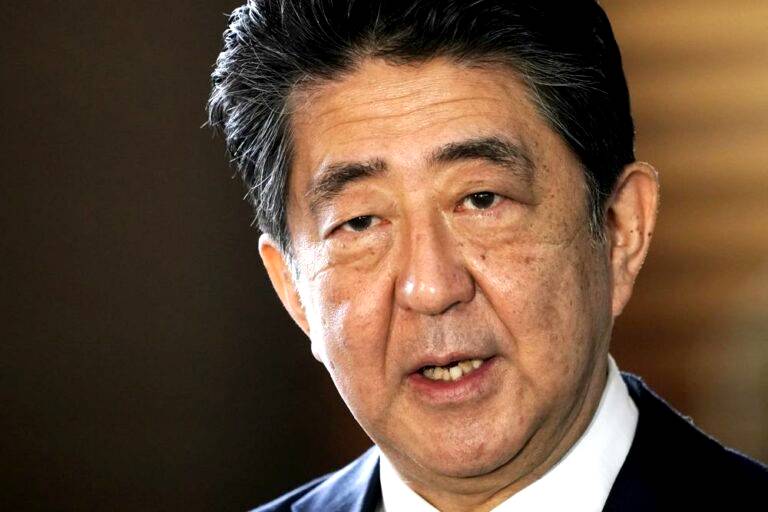 The former Japanese prime minister Shinzo Abe has died, aged 67, after being shot while making a speech in the western city of Nara.

Abe, the country’s longest-serving prime minister until he resigned in 2020, was flown to hospital by helicopter after the attack. It was the first assassination of a sitting or former Japanese premier since the days of prewar militarism in the 1930s.

Speaking before Abe’s death was announced, the prime minister, Fumio Kishida, condemned the shooting in the “strongest terms”, while Japanese people and world leaders expressed shock at the violence in a country in which political violence is rare and guns are tightly controlled.

“This attack is an act of brutality that happened during the elections – the very foundation of our democracy – and is absolutely unforgivable,” said Kishida, struggling to keep his emotions in check.

Footage and accounts broadcast by Japanese media showed Abe’s speech interrupted by two loud bangs – possibly from a shotgun – and smoke, with Abe stumbling to the ground after the second shot.

The hospital that tried to save him said he died at 5.03pm (0803 GMT), about five and a half hours after he was shot. A doctor said Abe had bled to death from two deep wounds, one on the right side of his neck. He had no vital signs when he was brought in.

Moments after the shooting, members of Abe’s security detail wrestled a man to the ground metres behind the former prime minister. The suspect was wearing a grey shirt, light brown trousers and grey trainers. His face was partly obscured by a surgical mask. He reportedly did not attempt to flee before being detained at the scene.

Police identified the suspect as Tetsuya Yamagami, a 41-year-old resident of Nara. According to local media reports, police said the weapon thought to have been used in the attack was homemade. A photograph showed two cylindrical metal parts that appeared to have been heavily bound with black tape lying on the road near the scene.

Abe, who had been in Nara to make a campaign speech ahead of this Sunday’s upper house elections, was a conservative politician known for his “Abenomics” policy to lift the world’s third-biggest economy out of deflation and for supporting a more prominent role for Japan’s military to counter growing threats from North Korea and a more assertive China.

Having quit abruptly as premier in 2007 after one year in the post, Abe swept back for a rare second stint in 2012, pledging to revive a stagnant economy, loosen the limits of a post-second world war pacifist constitution and restore conservative values.

He was instrumental in winning the 2020 Olympics for Tokyo, cherishing a wish to preside over the Games and even appeared as the Nintendo video game character Mario during the Olympic handover at Rio 2016.

While in office, Abe failed to realise his main political ambition – to revise Japan’s “pacifist” constitution, which prohibits the country from using force to resolve international disputes. In recent weeks, he had voiced support for significant rises in Japan’s defence budget, citing Russia’s invasion of Ukraine as proof that Japan should stay vigilant in case of a Chinese invasion of Taiwan.

Abe became Japan’s longest-serving premier in November 2019, but by the summer of 2020 public support had been eroded by his handling of the Covid-19 outbreak as well as a series of scandals, including the arrest of his former justice minister. Citing the return of a chronic bowel complaint that had contributed to the premature end to his first term in office, Abe resigned without presiding over the Games, which were postponed to 2021 due to the pandemic.

Japan has close to “zero-tolerance” of gun ownership – an approach that experts say contributes to its extremely low rate of gun crime. There were six reported gun deaths in 2014, according to the National Police Agency, and the number rarely exceeds 10, in a country of 126 million people.

Airo Hino, a political science professor at Waseda University, told Reuters such a shooting was unprecedented in Japan. “There has never been anything like this,” he said.

Senior Japanese politicians are accompanied by armed security agents but often get close to the public, especially during political campaigns when they make roadside speeches and shake hands with passersby.

In 2007, the mayor of Nagasaki was shot and killed by a yakuza gangster. The head of the Japan Socialist party was assassinated during a speech in 1960 by a rightwing youth with a samurai short sword. A few other prominent postwar politicians were attacked but not injured.

Reuters contributed to this report