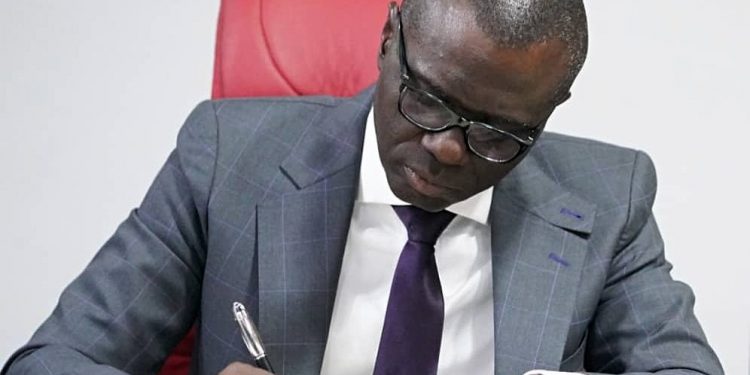 Lagos State Governor Babajide Sanwo-Olu has signed into law the State VAT Bill as passed by the House of Assembly.

The Governor signed the “bill for a law to impose and charge VAT on certain goods and services” at about 11. 45am today , after returning from an official trip to Abuja .

By this act, the Bill has now become a Law.

The Editor Nigeria recalls that the  Lagos State House of Assembly had on Thursday passed the State’s Value Added Tax (VAT) bill.

The Speaker Mudashiru Obasa had directed the Acting Clerk of the House, Mr. Olalekan Onafeko, to transmit a clean copy to Governor Babajide Sanwo-Olu for assent.

The bill was passed after unanimous votes by the lawmakers at the sitting where they were read the third time.

Immediately after their passage, Speaker Obasa commended his colleagues for their passion to see that the state continues grow.

“I Thank you all for this historic exercise,” Obasa said.

Recall that the Appeal Court sitting in Abuja on Friday ordered the government of Rivers and Lagos State to suspends plans to start collecting the Value Added Tax (VAT).

The Editor Nigeria  reports that in its ruling the court asked both states to maintain status quo pending the determination of an appeal that was lodged before it by the Federal Inland Revenue Service, FIRS.

A three-man panel of Justices of the appellate court led by Justice Haruna Tsammani said the order was to preserve the ‘Res’ (subject matter) of the appeal before it.