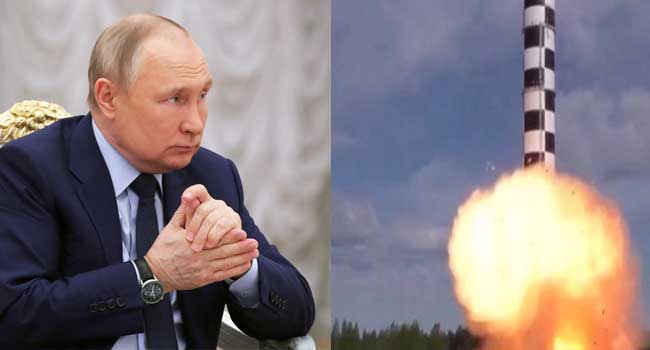 This online news platform understands that Russian President Putin was shown on television being told by the military the missile had been launched from Plesetsk in Russia’s northwest and hit targets in the Kamchatka peninsula in the far east on Wednesday, April 20, 2022.

“I congratulate you on the successful launch of the Sarmat intercontinental ballistic missile,” Putin told the army in televised remarks.

“This truly unique weapon will strengthen the combat potential of our armed forces, reliably ensure the security of Russia from external threats, and make those who – in the heat of aggressive rhetoric – try to threaten our country think twice.”

Newsone Nigeria reports that Sarmat is a new heavy ICBM that Russia is expected to deploy with 10 or more warheads on each missile, according to the United States Congressional Research Service.

It has been under development for years and so its test launch is not a surprise for the West, but it comes at a moment of extreme geopolitical tension over Russia’s war in Ukraine.

“The new [missile] has the highest tactical and technical characteristics and is capable of overcoming all modern means of anti-missile defence. It has no analogues in the world and won’t have for a long time to come,” Putin said.

The head of the Russian state aerospace agency called the launch in northern Russia “a present to NATO”.

Related Topics:Sarmat Missile
Up Next