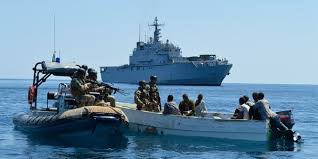 Daredevil pirates have abducted 6 ukranians and 2 others near Nigeriaâ€™s coast.

The Editor Nigeria gathered Â that six Ukrainians were among the eight crew members abducted from a Cameroon-flagged STEVIA cargo ship off the coast of Nigeria by pirates.

A spokesman for Ukrainian Foreign Ministry, Oleg Nikolenko, was quoted as confirming the abduction of the six Ukrainians on Saturday the Ukrinform news agency.

He, however, did not confirm the nationality of the other two crew members.

According to him, the pirates captured eight members of the crew, 28 nautical miles (51.8 kms) off the coast of Nigeria.

â€œYes, we are aware of this situation. As a result of a pirate attack on the ship off the coast of Nigeria on Dec. 16, eight crew members were captured, including six Ukrainian citizens,â€ Nikolenko said.

According to the diplomat, the owner of the STEVIA cargo ship is an Albanian company, so both the Ukrainian embassy in Nigeria and Albania were taking appropriate response measures.

The daughter of one of the captured sailors, on Saturday, also said that there were six Ukrainians aboard the vessel.

Pirate activity in the region has increased in recent years, prompting Nigeria, Ghana, and other surrounding countries to set up a naval coordination operation to combat the phenomenon. (ANI/Sputnik/NAN)