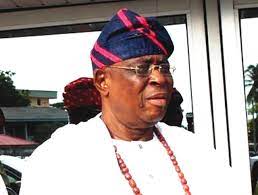 The Editor Nigeria reports that former Governor of Ogun State, Segun Osoba, on Tuesday, described the first 16 years after he left office as governor of the state as traumatic.

Osoba narrated that his successors, Gbenga Daniel, and Senator Ibikunle Amosun, made the state â€œhellâ€ for him after leaving office in 2003.

The former governor spoke at the commissioning of a press centre built in the premises of the Governorâ€™s Office in Oke-Mosan, Abeokuta, and named after him.

Narrating his experience immediately after he handed over to Daniel in 2003, Osoba said, he was declared persona non grata by the administration of Daniel, which he said prevented him from entering the state after his tenure.

Osoba said, â€œWhen I left office, I was so harassed to the point that all the plaques and the symbols of all the projects I did were the first to be removed throughout the state.

â€œThe first 16 years of my leaving this office have been very, very traumatic. I never came back, I became a snake that doesnâ€™t go back to where it has turned over its skin. This premises (Governorâ€™s office) became a no-go area for me. To imagine that in my life, my return to this premises will be this glorious is something of emotion.

â€œThe first eight years, I was virtually declared persona non grata in Ogun State, well, that is settled, those involved have come to apologise.

â€œMy name was sent to EFCC so many times. The EFCC investigated, because everything was documented in files, they found nothing.

â€œI couldnâ€™t come to Abeokuta not to talk of visiting the office of the Governor. The other eight years, that one, also became problematic.â€

Osoba however expressed his joy for coming back to the Oke-Mosan Governorâ€™s office after 16 years of leaving office.

The governor however lauded the former governor for his contributions to the development of the state and the country.

Panic As Suicide Bomber Blows Self To Pieces in Ebonyi

FG Agency Explains Why Buhari, Other Politiciansâ€™ Brains Must Be Tested