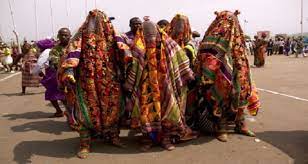 One person was reportedly killed as many others injured on Sunday when some armed masquerades attacked a mosque at Oluode Aranyin area of Osogbo, Osun state capital.

The Editor Nigeria learnt that the incident occurred around 2:30 pm on Sunday.

It was gathered that the masquerades accompanied by the police had earlier staged a walk pass by a mosque where members of the Kamorudeeen Islamic Society were holding a prayer before an argument ensued.

The masquerades allegedly brought guns and shot at the members of the kamarudeen Islamic Society leading to one death while some other sustained injuries.

This according to eye witness happened after the police had left.

The state Police Public Relations Officer Yemisi Opalola who confirmed the incident said some suspects have been arrested.

Yemisi Opalola maintained that calm has been restored with an assurance that investigations have commenced to unravel the circumstances that led to the incident.

Meanwhile all the injured persons are currently receiving treatment in the hospital.