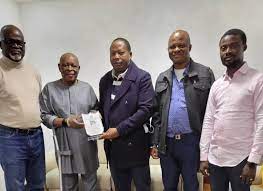 The All Progressives Congress (APC) chieftain is recuperating in the United Kingdom after a knee surgery.

In his remarks, the Speaker thanked God that the politician is doing well.

Unlike ex-Lagos Governor, Bola Tinubu, who underwent surgery and hosted scores of well-wishers, Osoba has received only a few.

Osoba left the country in September.