His death was announced on Thursday by his foundation. He was 85 years old.

“Former President FW de Klerk died peacefully at his home in Fresnaye earlier this morning following his struggle against mesothelioma cancer,” the statement by the FW de Klerk Foundation said.

De Klerk was the last leader under apartheid and a key actor in the country’s transition to democracy. 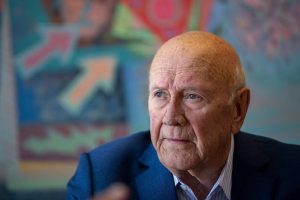 As South Africa’s last head of state from the era of white-minority rule, he and his government dismantled the apartheid system and introduced universal suffrage. Ideologically an economic liberal, he led the National Party from 1989 to 1997.

De Klerk was widely regarded as a politically conservative figure in South Africa. At the same time, he was flexible rather than dogmatic in his approach to political issues. He often hedged his bets and sought to accommodate divergent perspectives, favouring compromise over confrontation.