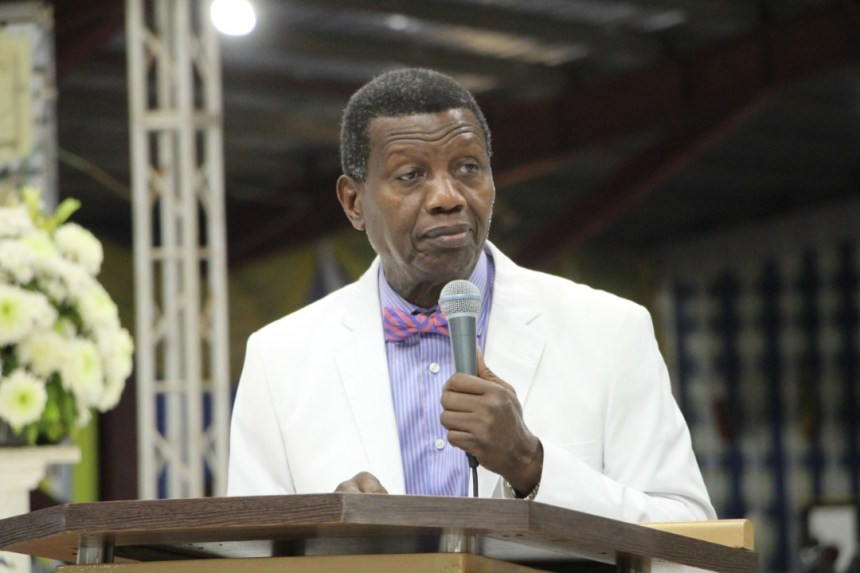 Editor Nigeria reports that The Federal Government through the Nigerian Civil Aviation Authority has grounded a private chopper belonging to Pastor Enoch Adeboye of the Redeemed Christian Church of God at the Lagos Airport, investigations by Sunday PUNCH, has revealed.

It was learnt that the aircraft, AgustaWestland AW139 chopper, with registration number 5N-EAA, was suspended from flying over two weeks ago, following the expiration of some of its papers and spare parts.

The suspension, officials said, would also allow the regulator to conduct vital safety checks on its safety-critical components, especially some spare parts that are due for replacement.

Adeboye had, last Saturday during a special meeting with all ordained ministers of the mission at the RCCG, Region 21, in Ibadan, the Oyo State capital, called for drastic action against corrupt practices in all facets of Nigeria.

The RCCG leader, who flew a chopper to the venue, said he arrived late for the meeting because someone had requested a bribe from him to fly his chopper.

He said he had decided to embark on the trip via his chopper to avoid a possible gridlock on the busy Lagos-Ibadan Expressway.

The 79-year-old mathematician-turned-preacher said, â€œI donâ€™t give excuses because I have discovered long ago that only failures give excuses. But you must pray for Nigeria.

â€œSomething must be done about corruption in this nation. All I can say is that I am this late because somebody wanted a bribe. And you know if you are expecting a bribe from me, you have to wait forever.

â€œBut the devil has failed. And the devil will continue to fail. I decided to come by helicopter so that there wonâ€™t be a traffic jam that would tie me down on the expressway because I know what the devil could do.

â€œThen, I ran into something else. But by the grace of God, we are here.â€

Although Sunday PUNCH could not ascertain who requested the alleged bribe from the revered servant of God, investigations by the paper revealed that the clericâ€™s chopper was suspended from flying by the regulatory authority over safety issues.

Multiple aviation sources confirmed that Adeboye could not fly his chopper with registration number 5N-EAA to the Ibadan programme but had to fly another aircraft reportedly belonging to Bishop David Oyedepo of the Living Faith Church (Winners Chapel).

A top official of the Nigerian Airspace Management Agency, who is close to the operations of the two choppers belonging to the servants of God, said, â€œThe team relating directly with Daddy G.O. should have told the man of God otyn time that his chopper had not been cleared by the NCAA and, as such, it couldnâ€™t go on the Ibadan trip. They shouldnâ€™t have waited till the last minute. The NCAA (aviation regulatory agency) that we have now is different from what it used to be. There is a new man in charge who always insists that things must be done properly as far as the safety of lives is concerned. The churchâ€™s protocol team should have told him that the NCAA has not cleared the aircraft and it may not clear it within a short time because certain procedure must be followed. As such, an alternative arrangement should have been made.â€

The NAMA official, who chose to speak on condition of anonymity because he was not authorised to speak on the matter, further said, â€œOn that last Saturday morning, when it later became obvious that the jet was not cleared to fly, they had to make an alternative arrangement with Bishop Oyedepoâ€™s chopper. They had to quickly begin that process by filing the flight plan, etc. It was Bishopâ€™s aircraft that Pastor Adeboye later flew to the event. He could not use his own.â€

A top official of Omni-Blu Aviation, the airline operating the chopper for Adeboye, confirmed the development.

The official, who chose to speak on condition of anonymity, said a letter from Italy-based Leonardo, the manufacturer of Adeboyeâ€™s AW 139 helicopter, requesting the NCAA to grant a time extension on some spare parts that are due for replacement came late.

The spare parts due for replacement have been ordered from the manufacturer but they have yet to be shipped into Nigeria because they are usually produced on demand, according to Omni-Blu Aviation.

As such, the NCAA could not immediately grant the requested extension. Instead, the regulatory agency requested that comprehensive safety checks be conducted on the aircraft in line with standard aviation safety practice.

He said, â€œThe NCAA that we have now is different from what it used to be. It always insists on standard. We donâ€™t want any disappointing situation for anybody, especially for a globally reputed servant of God like Daddy G.O. It appears the man of God was not properly briefed. But we thank God an alternative arrangement was made to rescue the situation. Safety is first and paramount. No life is worth toying with, how much more that of a servant of God like Daddy G.O. As an airline, we wonâ€™t compromise safety no matter the pressure.â€™â€™

The Omni-Blu official denied knowledge of any bribe request, either by the airline or aviation officials.

He, however, said it was not impossible that some people might have cashed in on the situation to demand a bribe.

â€œYou know some people donâ€™t fear God no matter what. They can even go to the extent of asking a servant of God for a bribe. So, it is not impossible. But on our part, I am not aware of such.â€

As it stands, it is uncertain when Adeboyeâ€™s chopper will be allowed to fly.

However, findings revealed that NCAA had directed maintenance and safety checks to be conducted on the aircraft.

As such, the operator has secured a date for this at Aeroâ€™s maintenance hangar.

When contacted for comments, the Director-General, NCAA, Captain Musa Nuhu, confirmed that the regulatory agency had suspended flights on the aircraft for safety reasons.

According to him, the NCAA does not often deal directly with individuals or owners of aircraft but the operator.

In this case, he said the NCAA only had business with the operator of the aircraft, Omni-Blu Aviation.

Nuhu said, â€œThere are safety-related issues that must be resolved before the aircraft will be approved for resumption of flights. Safety is the paramount consideration in all approvals given by the NCAA. No matter what, we must not sacrifice safety for flights; that is the whole idea.â€

When contacted, the spokesperson for RCCG, Pastor Olaitan Olubiyi, said the matter was being resolved already.

On the bribery allegation, he said the church would not want to take issue with the aviation authorities on the matter.

Olubiyi said, â€œWe will not want to take issue with the aviation authorities but I can assure you that an amicable solution is being found to the issue.â€