Chukwuemeka Nwajiuba, Minister of State for Education, on Wednesday in Abuja purchased the ruling All Progressives Congress (APC’s) nomination and declaration of interest forms for the 2023 presidential election.

Per details scooped by this online medium, Nwajiuba obtained both forms after a group, Project Nigeria, reportedly pooled the N100m fees.

An indigene of Imo State, Nwajiuba was appointed minister by President Muhammadu Buhari in August 2019. 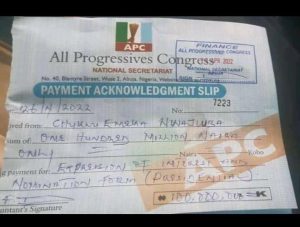 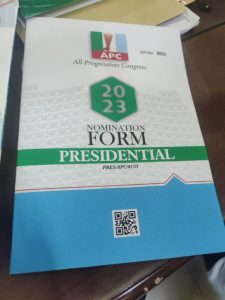 His decision has started drawing criticism from many public commentators who believe it is insensitive considering Nigerian students are currently at home due to a strike occasioned by the Academic Staff Union of Universities (ASUU).

Chris Ngige, the Minister of Labour and Employment; and the Minister of Transportation, Rotimi Amaechi, are some other Ministers who have officially declared interest in the 2023 presidency.

According to a new guideline of the APC, all political appointees who aspire to contest are to resign at least 30 days before the conduct of the primaries slated for May.