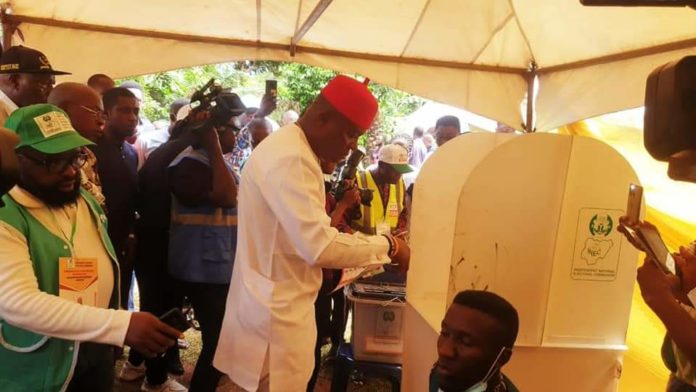 The governorship candidate of the Peoples Democratic Party (PDP) in the Anambra election, Dr Valentine Ozigbo, has exercised his constitutional duty.

The Editor Nigeria reports that Ozigbo cast his vote around 11:25 am at Polling Unit 5, at the Social Centre in Amaesi Ward of Aguata Local Government Area of Anambra state.

Speaking to newsmen after casting his ballot, Ozigbo decried the delay in the voting process, urging the Independent National Electoral Commission (INEC) to consider extending the time considering the delays.

The PDP candidate, however, commended the massive turnout of voters, asking those that have not cast their vote to come out and do so.

He said: “I’m impressed. If not for the delay, everything has been perfect. The network failed and we had to improvise.

I’m still monitoring the situation of things elsewhere. I urge people to come out and vote. Get up from your bed. Let’s go out and do our civic duty.