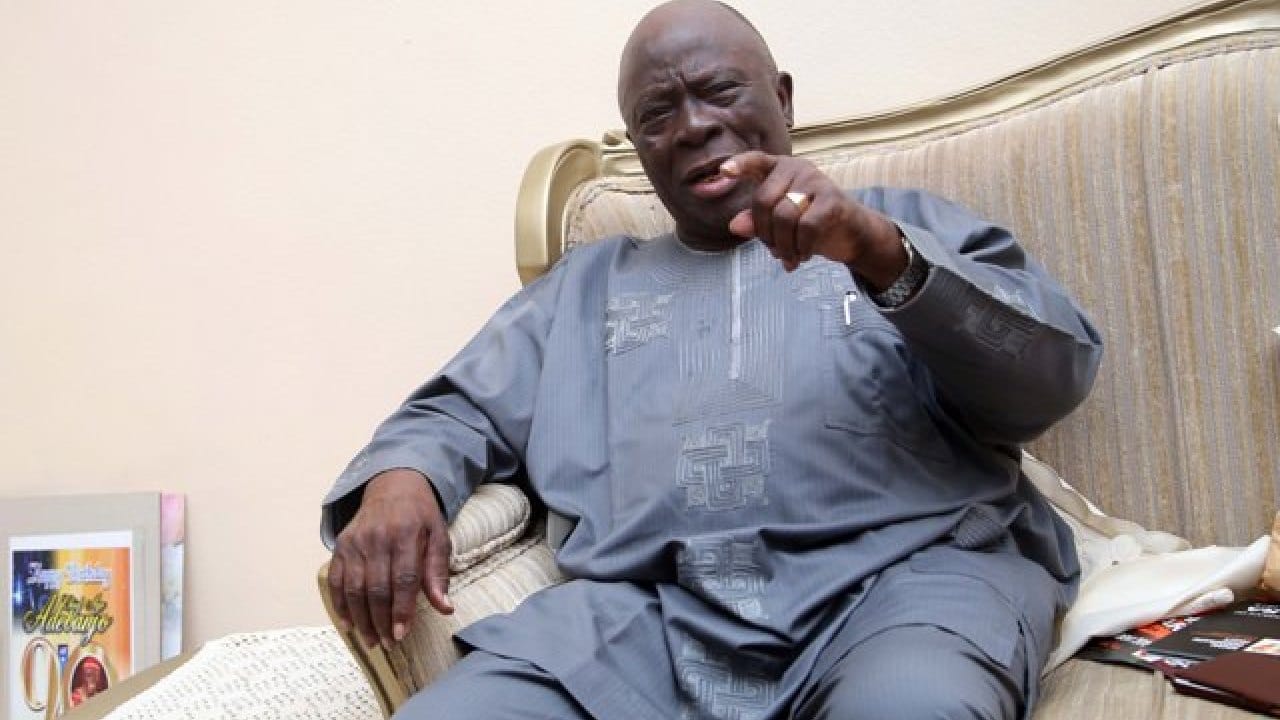 Afenifere leader, Pa Ayo Adebanjo, has explained why he is a fan of Governor Babajide Sanwo-Olu of Lagos State despite not being in the same political party with Sanwo-Olu.

The nonagenarian said Sanwo-Olu deserved commendation for what he described as the governorâ€™s prudent management of Lagos resources as well as the visible transformation of the state in a little over two years.

Despite their differences in political affiliation, Adebanjo and Sanwo-Olu had been seen together at Vanguard Personality of the Year 2019/2020 Awards held in Lagos penultimate Sunday.

Sanwo-Olu had emerged as Personality of the Year 2020 at the occasion alongside Governor Zulum of Borno State while the Afenifere leader was among the recipients of the Lifetime Achievement Award.

According to Adebanjo, the performance signature of the governor can be seen in all sectors of Lagos.

The elder statesman told Sunday Vanguard that Lagos under the leadership of Sanwo-Olu has continued to witness steady growth and development, especially in the areas of economy and infrastructural development.

The leader of the Yoruba influential group emphasized that the remarkable transformation of Lagos was impressively achieved by Sanwo-Olu despite the drastic reduction in the allocation to the state from the Federation Account.

He took time to applaud the revenue generation drive and leadership ingenuity of Sanwo-Olu in the last two years.

Adebanjo nonetheless charged the governor not to rest on his oars in his quest for a greater Lagos.

Similarly, the Coordinator of the Centre for Credible Leadership and Citizens Awareness, Dr Gabriel Nwambu, rated the performance of Sanwo-Olu very high in the last two years.

Nwambu, the resident in Lagos, lauded the governorâ€™s aggressive and systematic approach to road infrastructures that had been delivered in quite a number of urban and rural communities.

â€œBut I want him to improve the on-water project. Almost every city in Nigeria does not have potable water and we need to see properly planned efforts to overcome this problem in Lagosâ€, he said.

â€œBut he has done so well on roads and building community road infrastructures.

â€œHe should improve on the issue of security and water provision. I think those are the challenges he needs to focus on the moreâ€.

Like Adebanjo, however, Nwambu commended the revenue generation ingenuity of Sanwo-Olu in view of the global economic meltdown occasioned by the Covid-19 pandemic.

He emphasized that the pandemic had ruined the global economy.

â€œYou know, when you talk about FIRS and others, Lagos is one major state with the chunk of the revenues; but I know that the impact of Covid-19 has affected the state.

â€œSo, Sanwo-Olu, as governor, has scored a pass mark. He has performed credibly well given the circumstances he found himself in governanceâ€.

Sunday Igboho: Why South-West govs are afraid to speak out -Lawyer