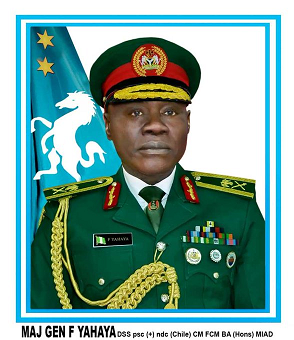 Yahaya also told the soldiers that Nigerians appreciate their selfless service and sacrifices towards restoring peace to the North-East region.

Yahaya was said to have embarked on his maiden visit to the Theatre Headquarters Joint Task Force North East Operation Hadin Kai, where he commiserated with them and prayed for their speedy recovery.

The statement read, â€œThe Chief of Army Staff made his maiden operational visit to the Theatre from June 16 to 19 to assess the operational and welfare state of the troops.

â€œDuring his visit to the hospitals, he assured troops of adequate medicare and support in the ongoing counter-insurgency operations.

â€œThe COAS gave the assurances on Friday, June 18, 2021 when he visited the 7 Division Hospital and University of Maiduguri Teaching Hospital to commiserate with the sick and wounded in action troops recuperating at the medical facilities.

â€œWhile at the hospital, the COAS took time to interact with the soldiers and assured them of proper medical care and welfare, adding that their medical care is of utmost importance to him.

â€œHe averred that the nation is indeed proud of their selfless service and sacrifices towards restoring peace to the North-East region.

â€œAlso, the COAS appreciated the commitment and selflessness of the troops in the Theatre and implored them to exhibit a high level of professionalism and ensure that all remnants of Boko Haram and Islamic State of West Africa Province terrorists are neutralisedâ€

Similarly, the COAS visited the Mechanical Repair Group to inspect the ongoing repairs and refurbishment of vehicles at the workshop through the use of local resources.

He commended the resilience and ingenuity of the engineers and technicians in fixing most of the vehicles that were hitherto classified as â€˜beyond local repairsâ€™.

Earlier, the new Theatre Commander, Major General Christopher Musa, briefed the COAS on the operational situation in the Theatre.

He assured him that all efforts will be geared towards bringing the war against terrorism to a decisive end.