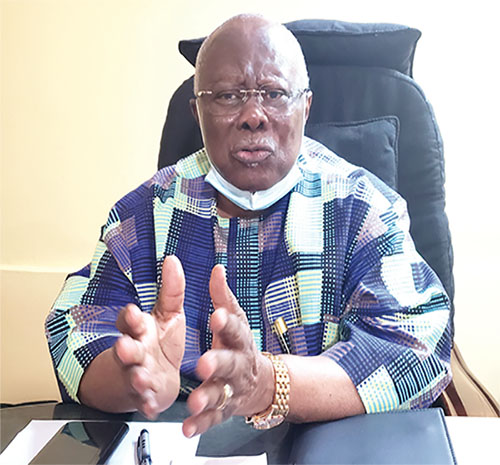 The Editor Nigeria gathered that a former Deputy National Chairman of the Peoples Democratic Party (PDP), Olabode George has frowned at attempts by stakeholders in the party to throw its presidential ticket open after zoning its national chairmanship position to the North.

The National Executive Committee (NEC) of the PDP on Thursday adopted the report submitted by the Governor Ifeanyi Uguanyi-led committee that recommended the zoning of the office of the national chairman of the party to the north.
Meeting in its 94th regular session at the national secretariat of the party in Abuja, the committee also resolved to defer consideration of the Governor Bala Mohammed-led committee that had earlier recommended throwing open the 2023 presidential ticket of the party to all zones.
Speaking in a chat with Daily Independent, George said the decision of the party on the zoning controversy is just like ‘kicking the can down the road’.

According to him, the PDP has a culture and rules that guides it in zoning the top six key positions in the party to the six geo-political zones in the country. He said if the national chairman position is zoned to the North, then then is no need debating where the presidency should be zoned to.

“The outcome of today’s meeting is like kicking the can down the road.  Once you accept that the chairmanship has been zoned to somewhere and you are still saying ‘throw presidency open to all aspirants in the country’. How? We have six geo-political zones and six top positions in PDP. When one position like national chairman goes to the North or South, the presidency will go to the opposite side. So, whom are we lying to? The issue is not yet resolved”.

“It is too confusing to just say I will support the decision. I have my position.  They are sending a massive signal to our other brothers in  the North. This country has never in history witnessed the tribal division as much as they are experiencing now. We need somebody to come and heal the land”.

“For me, they have sent a very solid message and I as a top member of the party believe that our language must be toned down. There is this sense of entitlement raging in the land”.

“There is nobody who should say he is entitled to this or that. Politics is about negotiation, discussion, democracy and being able to allow robust debate to win the hearts and minds of the people”.

“There is that serious infringement of rawness in the hearts and minds of many people in this country. We need the grace and fear of the Almighty God to overcome this”.