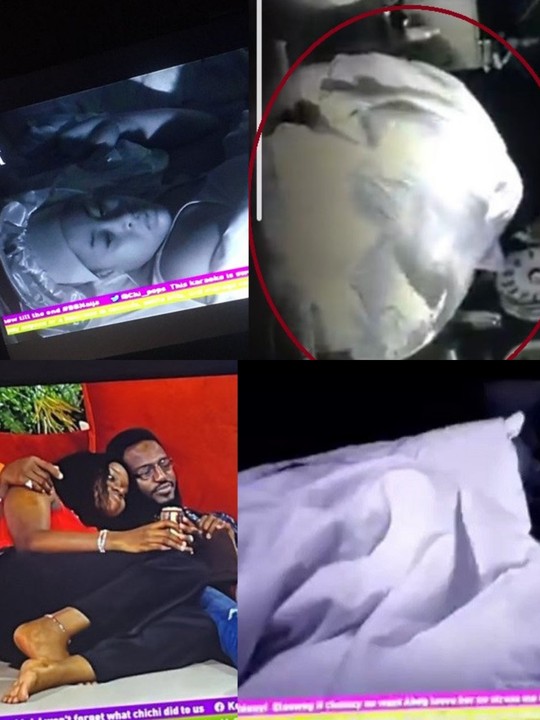 A video of the housemates having sex under the duvet after the eviction on Sunday night went viral on Sunday.

Recall that the housemates had their first sex in Big Brother’s house last week while other housemates slept.

Another video of Daniella and Khalid having sex again has gone viral. The duo was seen having sex under a duvet after the eviction on Sunday.

Reacting to the viral video, Mofe Duncan express exclamation by saying “Ah Toh” while Sikiratu Sindodo placed her hands on her head and Allwell Ademola wrote “wait, what”

One Warri girl reacted saying “This is really not right let’s be telling ourselves the truth. How long have you known each other for? What would your parents say abi they don’t have? This is very irritating abeg. I’m no saint but omo this is a no no!”

One Ngozi wrote “And their fam will be watching them like this? So shameful! You people can’t even wait for just 3months!”

One Elizabeth wrote “I hope she doesn’t ge pregnant. I’m no saint, but i don’t understand, with all the efforts ands lobbying pple do to get to the big brother house, they came and the next thing is start having intimate relationship just after few days? That aside! These are total strangers you probably know nothing or a little about! What if they have any stds or any bad spirit… The risk are endless! I just keep wondering”

One Brown sugar wrote “Daniella with the innocent look and good girl vibes? Go show dey ride prick in less than a month? These ladies would never learn! A man would come out of that show and move on nicely! But it never would be the same for her!”

According to him, the duo should be left alone.

“Nigerians stop criticizing Daniella and Khalid! Self-righteousness! Just stop it. Let them be. You ain’t better than them,” he wrote.

This is the second time Daniella and Khalid are having sex since the season began.