A Chief Magistrate court in Abuja has ordered that lawyer and human rights activist, Professor Zainab Duke Abiola, be remanded in the Suleja Correctional center till October 5th for a hearing of the case filed against her by the FCT police command.

Ms Abiola was arrested on September 20 for allegedly ordering her other domestic staff to assault her female orderly, Inspector Teju Moses.

She was arraigned before the court this morning on charges relating to Criminal conspiracy, causing hurt without provocation, an attempt to commit culpable homicide and Intentional insult to cause a breach of trust.

The magistrate court ordered that she be remanded in court till October 5 at the Suleja Correctional center. 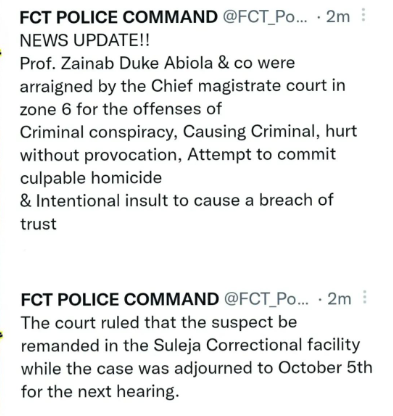 Atiku fires back at APC,Tinubu: Focus on the problems in your party