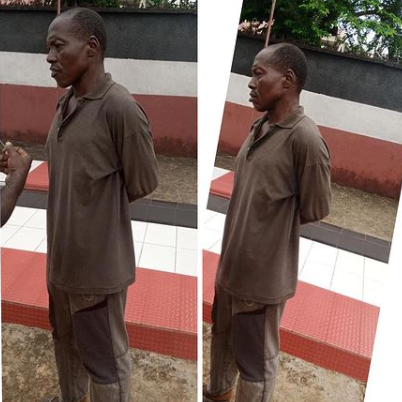 The daughters whose ages were given as eight, three, and one and half years were s3xually molested by their father, who claimed he was drunk.

Mr David Bille told journalists on Thursday in Awka that â€œWhen we got the report, we swung into action, arrested one Thomas Igbo, a plumber residing in Enugwu-Ukwu town in Njikoka area of the state.

â€œOur medical personnel later conducted a test and uncovered that the children were being abused s3xually. The suspect confessed to the crime and very soon, we will conclude investigations and arraign him,â€ Billie said.

The suspect, Thomas told journalists that he only had carnal knowledge of the eight-year-old daughter once and used his fingers to penetrate others at different times.

â€œI had s3x once with my eight years old daughter once, others I only used my fingers to penetrate their private parts when I am bathing themâ€, he said.